Today is Presidents’ Day – a holiday originated as a celebration of George Washington’s Birthday (February 22). It was declared a federal holiday in 1879. The holiday was officially assigned the third Monday in February by the “Uniform Monday Holiday Act” in 1971. Interestingly this means the holiday is never actually celebrated on Washington’s birthday!

Here are some lesser-known presidential facts: 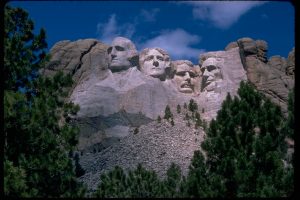 The iconic sculpture of four-revered U.S. Presidents in a granite cliff side in South Dakota’s Black Hills could have had a very different profile.

In 1937, a bill was introduced into Congress petitioning for a likeness of Susan B. Anthony to be included in the sculptures on Mount Rushmore. A clause in the appropriations bill funding the project, however, stipulated federal funds could only be used for carvings already underway and the bill came to nothing. 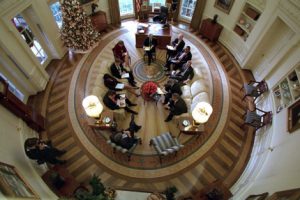 Why is the Oval Office…oval?

The president’s official office, the Oval Office, owes its shape to more than simple architectural taste. Teddy Roosevelt oversaw renovations of the space during his term, and the shape of an already existing “Blue Room” inspired the designs for the new presidential office.

The Blue Room’s ovoid shape was actually chosen to suit a “levee,” a social tradition common in the time of George Washington. During a levee, guests of the president would enter the room, bow to the president, and, after introductions were made, form a circle and await a formal greeting from him. The shape of the Blue Room was meant to accommodate and accentuate the power of the executive during this ritual. 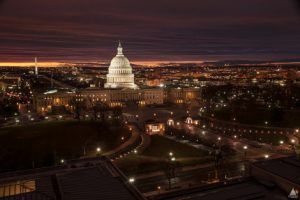 During the annual State of the Union address given by every U.S. President, it may seem as though every member of the government is present.

There is, however, one notable absence—the “designated survivor.”

This somewhat morbid tradition started during the Cold War due to fears of a nuclear attack. It is meant to ensure the succession of power should a catastrophic and deadly event befall the Capitol. Were such an event to occur, the survivor (or, less gloomily, the successor) would become Acting President of the United States under the Presidential Succession Act.

This system is not always clear-cut. For example, although then-Secretary of State Hillary Clinton did not attend the State of the Union in 2010, it was public knowledge she was at a conference in London. This prevented her from serving as the successor, even though she would have become Acting President in the event of a disaster because she was higher in the line of succession than the designated survivor.

Secretary of Energy Rick Perry was confirmed as the “designated survivor” just minutes before Trump delivered his annual address to Congress on February 5th.

These and other interesting facts are brought to you by VCU HR’s Well-being program – where we want to help you lead your best life!