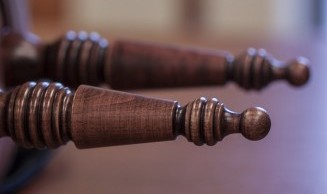 Virginia Commonwealth University announced today the acquisition of a Sefer Torah, a powerful symbol and moving presence in Jewish worship and community life. Presented by an alumni couple with deep connections to the university, it will be held and safeguarded by the VCU Libraries’ Special Collections and Archives.

Donors Martin L. Johnson, MD, and Olinda Young, have ties to both MCV and Monroe Park campuses. Johnson did his residency (house staff, plastic surgery, 1980) at MCV, and Young holds dual degrees, a bachelor’s of science in education (1975) and a master’s in public administration (1981).

Avid and eclectic collectors of global art, antiques and artifacts, “We’ve spent 30 years collecting beautiful things,” said Johnson. “Now, at this stage in our lives, we want to share these beautiful things.” An interest in collecting old Bibles led to an interest in Torahs. He describes this Torah as “a monument to the survivors.”

The Torah scroll, on parchment scribed in the customary Hebrew, was composed in Romania around 1750. During World War II, it was confiscated by the Nazis. It is believed to be from an area of Transnistria, known as the Romanian Auschwitz. Registration numbers and stamps confirm its provenance and also that the scroll was held by the Communists. It was repatriated to Israel in 2003. Israeli authorities released the scroll for private ownership. It is considered to be in excellent condition, according to the rare books and manuscripts appraiser who authenticated the artifact.

VCU Libraries will unveil the Torah, which is undergoing preservation, at a future event. It will be on display in the new library building, scheduled to open in 2015.

“We look forward to making this symbol of survival and hope available to our entire community for teaching, learning, and remembrance, always with appropriate reverence and respect,” said University Librarian John E. Ulmschneider.

University news features Dr. Jack Spiro’s explanation of the significance of the gift.