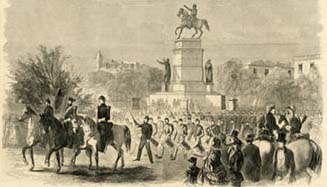 As the capital of the Confederacy, national and international attention were focused on Richmond, Va., throughout the mid-19th century. In a period when photography was still a new medium, news magazines relied on drawings and paintings for visual coverage of these scenes and events. The Richmond Nineteenth-Century Print Collection includes more than 140 such depictions dating from 1853 to 1901.

The images are created by both local and foreign artists, and were published in periodicals such as Harper’s Weekly, American Architect and Building News and Illustrated London News. The content of the images varies, providing a wealth of research opportunities, according to Archives Coordinator Ray Bonis: “The collection has dozens of applications for research — from how African-Americans were depicted in images, sometimes in grotesque stereotypes, to rare views that architectural historians might want of Richmond streetscapes or buildings now lost.”

You can view the prints online through VCU Libraries Digital Collections or see hard copies of these prints and others at Special Collections and Archives, James Branch Cabell Library.