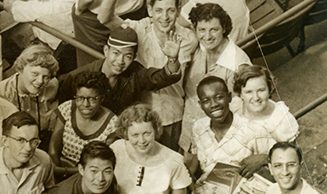 In 1946, following the chaos and horror of World War II and concerned by what they saw as the American education system’s failure, Algernon D. Black, a leader of the New York Society for Ethical Culture, and Alice Kohn Pollitzer, a prominent civic leader, began an experiment in democratic living. Inspired in part by the Civilian Conservation Corps and other work camps, the Encampment for Citizenship was a non-profit, non-partisan, non-sectarian summer residential camp for students.

Working with members of the American Ethical Union, Black and Pollitzer sought to create a life-changing experience. The student body would be racially, geographically and economically diverse. The educational program would be both intellectual and experiential.

The Encampment was founded on principles that had long been held and practiced by the AEU: a firm belief in the value and efficacy of education and the notion that one’s principles must be manifest in action. Education was seen as the first step toward solving many of the world’s most difficult problems.

The Encampment for Citizenship collection is held in Special Collections and Archives, James Branch Cabell Library. Materials include Encampment publications, program and recruitment brochures, correspondence and memoranda of staff and board members, letters and correspondence of students and alumni, alumni and staff directories, alumni newsletters and reunion materials, yearbooks, newspaper and magazine articles, fundraising and sponsorship materials, student and staff evaluation questionnaires, workshop materials, photographs and slides. The bulk of the materials date from 1946 to 1997, with concentrations in the collection’s holdings dating from the late 1970s to the early 1980s and from the late 1980s to the mid-1990s.

In 2016, as the Encampment marked its 70th anniversary, VCU Libraries presented materials from the Encampment Collection in its online gallery. It is the library’s hope that these photographs, documents and student publications serve as a digital scrapbook, revealing not only the organization’s history, but also some of its spirit.