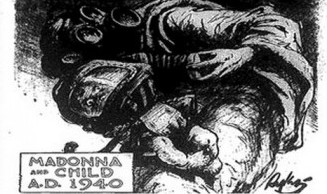 Born in Alabama and graduated from Philadelphia’s Drexel Institute in 1904, Sykes drew as a freelancer and then worked for newspapers. In 1914, he became the first and only editorial cartoonist for the Evening Public Ledger. It ceased publication in 1942, the same year Sykes died. Sykes also had working relationships with Life, Colliers and The New York Evening Post.

Sykes’ cartoons focus on American reactions to the major events of World War II. They also offer insight into medium and method: he created early cartoons using the unusual patterns of coquille board for the shading effect and later transitioned to crayon-and-wash technique. The cartoons are available for view in Special Collections and Archives, or online in digital format, further augmenting access to Cabell’s outstanding collection of comic arts. The collection consists of 297 original editorial cartoons, three unfinished sketches, a U.S. War Bond poster and a U.S. Victory poster.

His most famous cartoon, “Madonna and Child A.D.1940,” depicts the ugliness of war. The image is of a mother and child wearing gas masks. It was published on August 13, 1940–the first day of the Battle of Britain.

To view the collection in person, visit Special Collections and Archives on the fourth floor of Cabell Library.