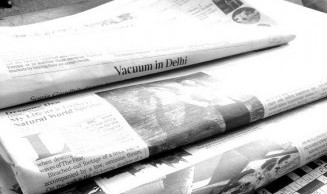 These periodicals tell VCU’s official story in news articles, features, calendars and images of students, staff, faculty and leaders. Departments and schools submitted articles and news items. Letters to the editor, editorials and formal messages from deans and the president are also found in the 542 issues in this online collection.

The first of these official news organs was published in May of 1972 as the weekly VCU Today. (It was preceded on the MCV campus by the Medicovan, published from 1948 until 1973.) VCU Today was published on an irregular basis, often monthly, until the 1980s when it became a bi-weekly.

The staff included professional writers, photographers and editors, who represented the views of the university administration and highlighted news that the school wanted publicized. By the 1980s, the newspaper was circulated to full-time staff on both campuses and was also made available in a number of VCU buildings. It was probably the institution’s best vehicle for communicating to the large university community.

The print issues are housed in the Special Collections and Archives departments in the Tompkins-McCaw Library on the MCV campus and in the James Branch Cabell Library on the Monroe Park Campus.

Dates for the publications: