Today we crossed major milestones in two of our relatively new applications. As of this morning, the new A-Z index has generated over 150,000 visits to VCU websites through either the VCU search or the A-Z index itself. That averages out to over 2100 visits per day since the A-Z index went live on August 6. Since that time, we’ve made several improvements to the system, and we’ll continue to make it better. 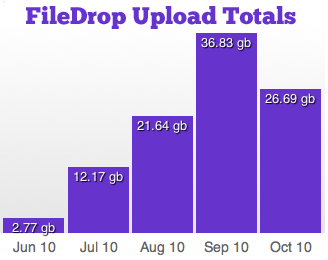 In addition, today FileDrop passed the 100 gigabyte mark in files uploaded. It has seen a steady rise in use since it’s July debut, nearly doubling in total data stored each month. Since that time, 455 users have sent 3840 files to 1043 people in 1452 separate messages. The average file uploaded to FileDrop is around 26.75 megabytes, though there’s over a 1 in 4 chance it’s a jpeg. Jpegs, PDFs, and Word documents make up 55% of the files uploaded, but only 11% of the data. The largest file that’s been uploaded so far was a PDF at 1018 megabytes (just shy of the 1 gigabyte limit).
In honor of this FileDrop milestone, we’re increasing the file size limit to 2 gigabytes, with a minor caveat that any message containing files over 1 gigabyte will expire after 3 days instead of after 2 weeks. (As we add more storage to the system, we may increase the length of time before large files expire.) We’ll continue to add improvements to FileDrop going forward.