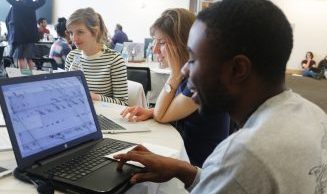 One of the emerging and expanding roles of libraries is the creation of scholarship. This work, which adds

to the ongoing role of libraries to provide protection, perservation and access to scholarship, is explored in a transcribathon in partnership with the respected Folger Shakespeare Library.In 2015 and 2017, VCU Libraries bought some 100 members of the VCU and RVA communities into James Branch Cabell Library to work on transcribing 17th-century manuscripts handwritten in early modern English. Photos from to April 7, 2017 session.

These hands-on digital humanities projects involved students, teaching faculty and staff, librarians, community members and scholars from the Folger Shakespeare Library in Washington. Co-sponsoring with the VCU Department of English, the VCU Humanities Research Center and the Folger, VCU Libraries showcased its commitment to collaborative learning through digital creation.

Transcribathons – developed by the Folger – are held nationwide. Students and scholars examine scanned versions of rare manuscripts held by the Folger and work with teams to decipher and type up in legible text the often difficult handwriting from the time of the Renaissance. The Folger’s holdings include letters, polemics and copies of poetry circulated among friends, and they number in the many thousands. “We don’t know what’s in them yet,” Heather Wolfe, Ph.D., curator of manuscripts and archivist, remarked at one VCU event.

The Folger has established the Early Modern Manuscripts Online (EMMO) project to make a variety of rare manuscripts from the Folger Shakespeare Library’s premier collection available to users for free via an easy, searchable website with high-quality images and consistent digital transcriptions of letters, diaries, wills, coats of arms, literary pieces, recipe books, miscellanies and more.

At transcribathon sessions, beginners and experts work together, comparing notes and versions of the original handwriting using the EMMO menu of tools available at the website. “What you will do today matters,” Wolfe told everyone at the VCU event, emphasizing the role of collaboration for digital scholarship and the lasting access to crucial knowledge that such efforts achieve for researchers across the world. “The Transcribathon,” said Humanities Collections Librarian Kevin Farley, Ph.D., “aligns perfectly with the advancement of digital scholarship at VCU Libraries – an openness for all who wish to participate in a collaborative learning and creating environment.” VCU participants worked on portions of two manuscripts from the 17th century and encoded them using tags in XML in an easy-to-use interface.

“The purpose of this kind of activity is to make difficult-to-read manuscripts accessible to and searchable by scholars, teachers and students,” said co-organizer Claire Bourne, Ph.D., an assistant professor in the Department of English in the College of Humanities and Sciences. “The work of those participating in the VCU transcribathon will be in the service of future scholarship and learning.”

On Friday afternoon, April 7, Transcribathoners gathered in the lecture hall of Cabell Library. A Transcriba-what?

Transcribathons are organized by the Folger Shakespeare Library: Think of it as crowd-sourcing to decipher the handwriting of early modern manuscripts. Co-sponsored with the Folger Shakespeare Library, the VCU Department of English, the VCU Humanities Research Center and VCU Libraries, the Transcribathon provided hands-on digital humanities work—moving forward the Folger project to provide readable transcriptions of rare manuscripts in their collections via an open-access database for global access by researchers and students of this pivotal era in history (http://emmo.folger.edu/).

Handwriting from this period followed a variety of forms, including the prominent “Secretary’s Hand,” which may seem to our eyes ornate and often somewhat unreadable. And yet this kind of detective work is extremely popular—especially at VCU, which has the honor of being the only university to host a Transcribathon twice!

her photos are available on the library Flickr site.