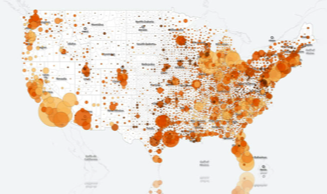 Social Explorer provides quick and easy access to current and historical demographic data. Easy-to-use online tools help users create custom maps and reports to visualize, explore and understand the patterns behind the numbers. The latest version offers new ways to explore and present data from 1790 to the present, from U.S. neighborhoods to across the globe. Users can access more than 220 years of census data with tens of thousands of maps, hundreds of reports, over 400,000 variables and 40 billion data elements.

The core data library includes U.S. Census data from 1790 to 2010 and American Community Survey data from 2005 to 2014. Users can examine this wealth of demographic information at the national, state, county, census tract, metropolitan statistical area (MSA) and block group geographic levels (where available).

Customizable and user-friendly maps, allow unparalleled exploration of demographic data and social change. Users can explore interactive maps with over 200 years of detailed data. See how your neighborhood and country have changed over the decades. Data visualization tools include bubble maps, dot-density maps and bar and color-coded charts.

Users can create detailed data reports with the Reporting Tools. Export one or thousands of variables and geographies quickly and easily. Excel, CSV, and other file formatting shortcuts allow you to work with data in a variety of software programs for further analysis.

Users are encouraged to create an account so that they are able to save their work and access it for later use.