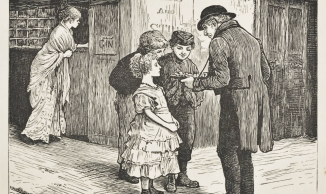 A new resource at VCU Libraries provides an almost “street view” of the topsy-turvy world of Dickens and Sherlock Holmes — only it was all too real for those who lived on the margins:  London Low Life.

Through visual records of cartoons, maps, sketches, subversive posters — and the texts of broadsides, “swell’s guides,” chapbooks, ballads, slang dictionaries, and more — researchers can experience the vibrant and illicit culture of London street life.  The brothels, gin houses and East End slums of the 19th century’s greatest city reveal the contradictions of a progressive era marked by the neglect of those consigned to poverty.

Fascinating in its depth of detail, London Low Life illumines the dark, secretive, and dangerous paths of a forgotten history and the lives of those who suffered but also subverted their situation.

Image: The Great army of London poor: sketches of life and character in a Thames-side district / by the river-side visitor, The Lilly Library, Indiana University