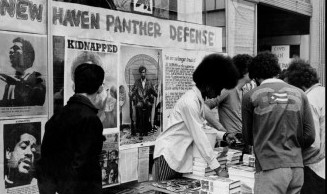 For much of the 20th century, librarians fielding questions relevant to the topic of race and violence guided researchers to historical and general social science resources.

Scholars found articles about people, court cases, or events in databases like America: History and Life, or Sociological Abstracts. Primary evidence might be most easily found in newspapers, and court records. Photographic records, personal and agency records, newsreels, and video have long been available, but until large-scale digitization efforts were underway,  these were not readily accessible outside of individual archives.

In 2016, the range and number of resources on race and violence, and their ease of access, looks quite different.

It’s possible to create quick searches that reveal compelling patterns of growth and change in disciplinary topic treatment. A sophisticated multi-disciplinary database, like Web of Science, allows a search that offers evidence for expanding perspectives. Comparing decades, and using a search on “race OR racial” and “violence”, an effort identifies:

This exercise reveals the information explosion in research. But, these sorts of carefully constructed searches can offer evidence to help us  quantify, and pinpoint these “explosions” in a field.  What may be more intriguing, if not entirely surprising, is that while the 11 articles from 1970-1980 spanned across four broad disciplinary areas, notably sociology and ethnic studies, by the most current five years, the 1,386  identified articles spanned 50 broad research areas. These 50 include predictable disciplines like history, psychology and urban studies, but also include research in fields like substance abuse, anthropology and international relations. The largest current disciplinary area for this research appears to be in criminal penology, with emerging  research in areas as diverse as surgery and linguistics.

Today, librarians will want  to understand more about your interests in race and violence to recommend additional databases, but here are some starting suggestions:

Because Web of Science is also a citation-tracing database, it is possible to reveal author connections, disciplinary crossovers and persistence of research findings through citation analysis. This sort of search in Web of Science can quickly identify leading and new scholars in a field like race and violence, or other areas. For help with crafting a search in Web of Science that can reveal a quick picture of growth in disciplines relevant to topics that interest you, contact Sara Williams, liaison to African American Studies.