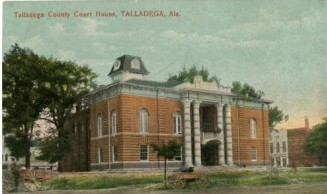 The collection features U.S. county courthouses and other municipal buildings such as town halls and city halls. The postcards represent every state except for North Carolina. Many of the buildings depicted were built  in the late 19th or early 20th century. Some no longer exist. The collection documents various architectural styles. Browsing the collection, you can find clock towers aplenty (Springfield, Mass., Springfield, Ohio, Lincoln, Neb. and more). You’ll find public buildings hundreds of miles apart that resemble each other. (Take a look at Richmond, Va.’s city hall and that of Grand Rapids, Mich.) Domes, columns, soaring arches are typical features of these turn-of-the-century governmental cathedrals.

The postcards also illustrate the various state government structures. Many states have at least two tiers of local government, counties and municipalities (village, town, city, and borough), but some have unique governing structures. For example, the Commonwealth of Virginia has 95 counties and 38 independent cities. In most states, cities are part of the county government.

This collection was amassed by James F. Stubbins, who taught pharmaceutical chemistry for 34 years at the School of Pharmacy, Virginia Commonwealth University. Born in Honolulu in 1931, his family was living in the Philippines when Pearl Harbor was bombed in 1941. Stubbins, along with his mother and brother moved to Denver to live with family until the war ended. When he was 14 the family moved to Las Vegas. Stubbins earned a bachelor’s degree in chemistry from the University of Nevada at Reno in 1953 and then served in the Army. He earned a master’s degree in organic chemistry from Purdue University in 1958 and a doctorate in medicinal chemistry in 1965 from the University of Minnesota. Stubbins joined the faculty of the Medical College of Virginia (now VCU) in 1963 as an assistant professor of pharmaceutical chemistry. Among the faculty, he was well known for his boxes of index cards on which he recorded the details of every scientific paper he read. Stubbins retired from VCU in 1996 and was granted emeritus professor status.

An avid postcard collector, he began the hobby as a young man. He was a founding member of the Old Dominion Postcard Club, formed in Richmond in 1978. Stubbins died on April 22, 2009. His family made a gift of his collection to Special Collections and Archives, James Branch Cabell Library in 2010.

By Sue Robinson, director of communication and public relations. For more information about this resource or others