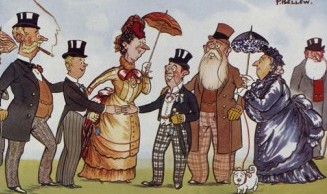 VCU Libraries expanded its British Periodicals series with the acquisition of British Periodicals I and III. This series consists of facsimile page images and searchable text for nearly 500 periodicals published between the 17th and 20th centuries. Topics covered include politics, science, history, literary and creative arts, archaeology and popular culture.

British Periodicals I is the foundation of the series, some 160 journals that comprised the Early British Periodicals microfilm collection. This collection covers topics such as politics, science, history, literary and creative arts, archaeology and popular culture. Titles in this series include the Athenaeum, the Scottish Review and the London Journal.

British Periodicals III extends the scope of the series into the first half of the 20th century. This collection contains illustrated periodicals known as the “Great Eight” in British publishing. These popular periodicals covered news, art, photography and literature of the era. Titles in this series include Britannia and Eve, The Sketch, and The Tatler. Images are in full color when present in the original.

These additions join British Periodicals II, a collection dedicated to the arts, in VCU Libraries electronic resources. Material from these collections is available to download either as PDFs or JPEG images.