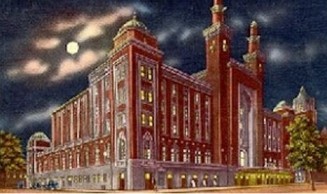 Visitors to Capital Alehouse, a popular restaurant located in downtown Richmond, may have noticed some unique pictures of the city hanging on the walls. What they probably don’t know is that these pictures are actually prints of Richmond postcards that Virginia Commonwealth University has been collecting for years.

The images came from a digital exhibit called Rarely Seen Richmond that contains early 20th century postcards of the city. The exhibit was put up by Special Collections and Archives at James Branch Cabell Library, and contains about 600 unique postcards that anyone can download and use for free – which is how Capital Alehouse got them.

“Both owners were from Richmond and wanted to incorporate Richmond into the restaurant,” said Kyle Johnson, the restaurant’s associate manager. “That’s when they found the postcard series at VCU.”

The exhibit began in 1998, when archives coordinator Ray Bonis put up 50 postcards that focused on Richmond architecture. Then, a few years later, a retired police officer called Bonis with an interesting offer.

“He said, hey, I’ve got a collection of about 2,000 postcards. If you want them, you can have them,” Bonis said. William Schuman donated the 2,000 postcards to VCU, and about 500 of them made it into the Rarely Seen Richmond exhibit.

The cards chosen from Schuman’s collection, as well as the original cards Bonis collected, are all from the same period.

“We stuck with the ones from about 1900 to 1930,” Bonis said. “They picked better scenes, and the color was more natural…. We also didn’t have to worry about copyright, which is the big thing if you put stuff on the Digital Library.”

“I’d say about 90 percent were used,” Bonis said. “It’s kind of neat to see the writing on the back…. Sometimes they say outrageous stuff.”

But the real attraction of these postcards, according to Bonis, is the history of the images.

“I think the best thing about this is the architectural history,” Bonis said. “It gives people an idea of what Richmond looked like. A lot of Richmond is torn down now, and it gives people a chance to look at how things were.”

Tom H. Ray, the collections management coordinator at the Library of Virginia who worked with Bonis on a book about Richmond postcards, said he is especially fascinated by images of buildings that look very different today. He said some of his favorite cards show the capitol building in its original state.

The images of city sights never seen before may be the most attractive thing about the collection, because Capital Alehouse is not the only venue interested in using copies of the postcards; Bonis said he gets requests to use the images three or four times a year. But Bonis is especially interested in the prints at Capital Alehouse.

“They’ve got a ton of our postcards,” he said. “I keep hoping to go down to the restaurant and mention to them that I scanned all these cards, and maybe I’ll get a free meal.”

To view the collection in person, visit Special Collections and Archives on the fourth floor of James Branch Cabell Library.