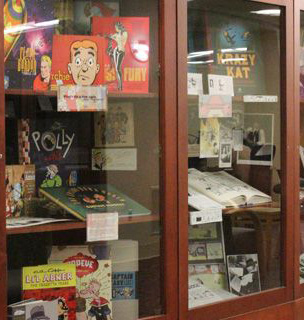 VCU Libraries continues to build its research collections of primary source materials supporting the teaching, learning, research and health care needs of the university. In celebration of the 100th anniversary of the passage of the 19th Amendment, Special Collections and Archives completed the arrangement and description of a number of archival collections documenting organizations and individuals who worked for social justice in Virginia.

Many of the newly processed collections document the history of women and their activism to secure an equal place in society. They include:

Bonnie Atwood papers
Atwood, a feminist, lobbyist, author and activist from Virginia, became involved in various activist causes such as the women’s movement, the Vietnam peace movement, and the Civil Rights movement. Her papers provide insight into the beliefs and methodologies of grassroots second-wave feminist activists during the 1960s and 1970s.

Betsy Brinson collection of AIDS epidemic exhibit materials
The contents of this collection are associated with an exhibit presented at the Richmond Public Library in 2017 titled “The Modern Plague: Voices and Images of the Early AIDS Epidemic.” It contains oral history interviews conducted by Betsy Brinson in 2016 and 2017 with people who volunteered and worked with affected communities in the Richmond area during the height of the AIDS epidemic in the 1980s and 1990s. Researchers will find content relating to major HIV/AIDS organizations in Richmond including the Fan Free Clinic, Richmond AIDS Information Network, and the Central

Virginia Crockford papers
Virginia Allen Crockford (1917-2001) served on the City of Richmond School Board from 1962 to 1972, and as its chairperson from 1968 to 1972. During her tenure, Crockford advocated for the desegregation of city schools and expanded its sex education curriculum. Crockford also served as the president of the Virginia Parent Teacher Association, the League of Women Voters, and the Central Virginia Health System’s Agency. A primary focus of the collection is the desegregation of Richmond public schools. A primary focus of the material is the desegregation of Richmond public schools, highlighting public reaction and the school board’s response and implementation of this policy

Willie Dell papers
Willie Jones Dell is the first black woman to serve on the Richmond City Council (1973, 1977-1982), and is a VCU alumna. The collection consists of Dell’s correspondence, campaign files, city council administrative files and other materials related to politics in the Richmond area. The collection provides a look into Black politics in Richmond in the decades following the Civil Rights movement. It also provides insight into the increased involvement of women in local politics, as well as the backlash from certain communities as a result.

Joan Girone papers
Joan Girone was a Chesterfield County politician and the first woman to serve on the Chesterfield County Board of Supervisors. Along with fellow Republicans, she fought against the consolidation of the Chesterfield, Henrico, and Richmond school systems ordered by Judge Robert R. Merhige in 1972, which aimed to integrate the public schools. The papers provide insight into the administrative duties of local government in the Richmond area and highlight the platforms of the Virginia Republican Party in the 1970s and 1980s.

Zelda Nordlinger papers
Nordlinger was a freelance writer and co-founder of the Richmond branch of the National Organization for Women (NOW).  Her papers include correspondence, NOW newsletters and promotional materials that include a large collection of political buttons.

Hibben, Y.D. (2019). “The electronic exhibition space as a catalyst for engagement and inquiry.” Art Libraries Journal 44(4).

Hibben, Y.D. (2019, Oct. 17). Collections and legacy: the life of your book after it is published/self-published. Presented at the Society for Photographic Education Southeast Chapter Conference, Richmond, VA.

Using the Levels of Digital Preservation: an overview for V 2.0. Authored by the Levels of Preservation Revisions Working Group, National Digital Stewardship Alliance, October 2019. (Margaret Kidd was a member of this working group, NDSA is a national group with international reach).

Notable Service Contributions
Margaret Kidd was appointed by the ArchiveSpace Governance Board to its Users Advisory Council for two years.