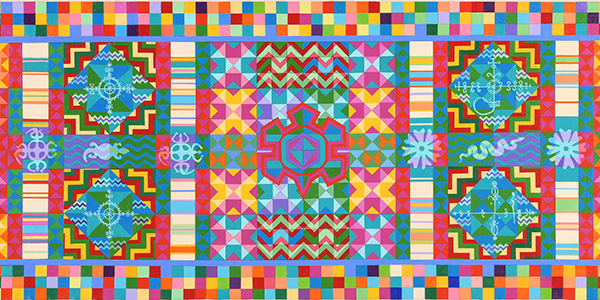 Murry N. DePillars, Ph.D., served as Dean of VCU’s School of the Arts from 1976 until 1995. DePillars nurtured a fertile period of progress at VCUarts. Under his leadership, enrollment nearly doubled and the faculty grew in size and stature. DePillars’ vision and action are largely credited with establishing the school as one of the most highly regarded programs in the nation. More information about Murry N. DePillars, Ph.D., can be found here: https://arts.vcu.edu/community/murry-depillars/

Murry DePillars described his use of color as deriving from both the quilt aesthetic and the Kongo aesthetic kumu mu menga, or “blood time,” which literally means to hold and develop the beat the blood. DePillars juxtaposed clashing, bright hues–pyrrole red, medium magenta, emerald green, cobalt turquoise and cadmium yellow– in close proximity, making the colors vibrate. Echoing art historian Dr. Robert Farris Thompson, DePillars referred to this palette as the “coloration of thunder.” Thompson writes, “How do black quilters organize this thunder? … To have kumu mu menga means that a sense of time and patterning emerge, like a spirit, in the fingers to be resolved in finished textiles, or in the tongue, to be resolved in song or chant.” In painting, DePillars resolved these spirits in the ghostlike forms shimmering through the vibrant geometric surface of the canvas, like messages waiting to be deciphered.

To coincide with the commemoration of the Dr. Murry N. DePillars Building last fall, the School of the Arts partnered with Richard Woodward, curator of African art, to organize this exhibit which appears in digital form on the Cabell Screen. It includes works representative of those created over his 40-year career as an artist.