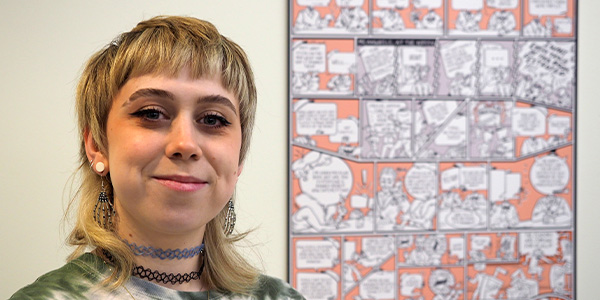 Supported by generous funding from the Cabell Library Associates, this year’s contest focused on the events and issues surrounding the 1920 censorship of James Branch Cabell’s Jurgen: A Comedy of Justice by the New York Society for the Suppression of Vice.

With imagination, thought, and skillful storytelling, VCU students created single-page multi-panel comics similar to the Sunday funnies that Cabell might have read in 1920s newspapers.

Erin Crawford won this year’s $1,000 Grand Prize with “Cabell Walks Into a Bar,” calling to mind the newspaper comics of Winsor McCay. Runner-up awards of $250 went to Tess Wladar for “The Judging of Jurgen” and Jay Crilley for “Swear to It.” Hannah Smith, Katy Hooper and Ty Campbell received honorable mentions.

All winning entries are being published in VCU Scholars Compass and exhibited on the first floor of James Branch Cabell Library. Details from all contest entries are being displayed on the Cabell Screen in celebration of each student’s evident talent and unique contribution to VCU Libraries’ first Jurgen Comics Contest!

Cabell Walks into a Bar
Erin Crawford is a senior in the communication arts department at VCUArts. “I got started on this project after receiving encouragement and space to work within my Comics and Graphic Novels 1 class. I first looked at how Jurgen was censored for perceived wrongdoings and implied topics, and second, the increased interest in the book after it was banned. I depicted each person’s head as speech bubbles as additional commentary on how we are all our thoughts and words or actions, and if those are censored then it can be a slippery slope into censoring an entire person.”

Swear to It
Jay Crilley is a senior communication arts major from Pennsylvania. “After some research, I became interested in John S. Sumner, the Leader of the New York Society for the Suppression of Vice, and the leading figure crusading against the publication of Jurgen. The comic is a dramatized version of a debate he participated in shortly after the Jurgen trial ended.”

The Judging of Jurgen
Tess Wladar is a Richmond-based illustrator and comic artist majoring in communication arts at VCU and graduating in 2023. “My comic is based on ‘The Judging of Jurgen,’ a short story written by James Branch Cabell in response to the controversy surrounding his novel, Jurgen: A Comedy of Justice. ‘The Judging of Jurgen’ serves as an addition to the original novel and is essentially a fable about how art can be unfairly and illogically censored.”

A Silent Fate
Ty Campbell is an art foundation student who plans to go into communication arts. “My entire life and creative work surrounds telling stories, and creating a comic is no different to me. My background in storytelling and character design lent me well to the Jurgen Comic Contest, and I hope that those who see my work enjoy the diversity and creative symbolism hidden throughout my submission. Regardless of the results of this contest, I will continue telling stories and one day, you’ll find my work in the Barnes and Noble on campus.”

Moral of the Story
Katy Hooper is a senior majoring in communication arts. “Questions of censorship and the role of art in society are something I’ve been thinking about a lot over the past few years. As I was making the comic, I struggled to come up with clear answers to the questions I had been asking for so long — and so finally I decided that rather than trying to definitively answer these questions in a single page, I might be able to communicate more clearly if I made the comic about the process of asking the questions.”

The Banning of Jurgen
Hannah Smith is a communication arts major graduating in 2024. “I had a really fun time doing research for this comic! I was especially inspired by the work of Frank Pape, who did illustrations for Jurgen.”

Blank Spines
Michael Mizusawa is majoring in communication arts. He aims to graduate in May. Michael says, “In terms of coming up with the comic, my biggest problem was that I neglected to read the story and the rules in time. I was able to solve this problem by making a comic about basic book censorship that I felt was at least relevant to the themes of the book. It was never my intention to win, only to have the experience of entering a contest.”

Prohibited
Kristen Rankin is a sophomore at VCU who plans to graduate in 2024. Kristen says, “I am proud to be a member of the commarts program! I’ve been really interested in short format comics for a while now, and knew immediately that participating in this competition was a must! It was super fun to sit and think about how to push the boundaries of what comics are supposed to look like, and play around with what the characters straight from Cabell’s Jurgen might say if they knew what happened to their story!”

Alyson Piccione is the Jurgen Comics Contest student editor. A senior pursuing a BFA in communication arts and a minor in creative writing, Alyson has created caricatures, posters, and a contest newspaper in that role. “I’m an aspiring storyteller and artist who is looking to pursue a career in animation, comics, and/or writing—really any creative avenue I can follow. Outside of my art, I love learning about history and folklore, along with studying their impacts on society and written stories. Oftentimes, I’ll implement those elements into my own works.”