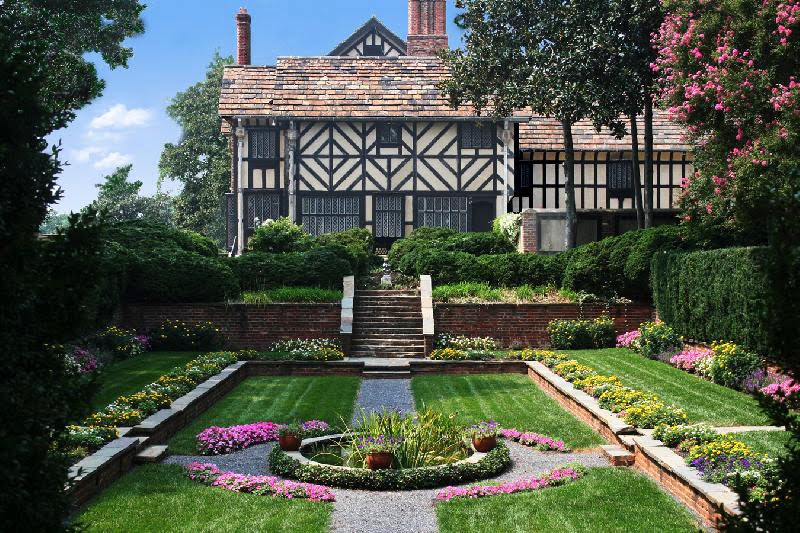 The Agecroft exhibit will show on the Cabell Screen afternoons until July 2.

Agecroft Hall & Gardens is a majestic Tudor manor house brought to Virginia from Manchester, England. Built in Lancashire, England in the 16th century, Agecroft  was the home of the landed gentry Langley and Dauntesey families for four centuries. By the mid-1920’s, the house was declining and on the verge of being demolished when Richmonder  T.C. Williams, Jr. bought the property. It was dismantled and shipped across the Atlantic to be rebuilt on a 23-acre plot above the James River, where it has stood since 1927.

After decades as a private residence in Windsor Farms, Agecroft became a house museum showcasing life in a Tudor manor house. The house is surrounded by glorious English gardens designed by Charles Gillette, and together, the house and gardens today pay tribute to the Elizabethan Age. It is home to summer performances of Shakespearean plays under the aegis of the Richmond Shakespeare Festival.

The two-story house holds many treasures. Many of which are inaccessible to people who cannot climb stairs.

To create a 3D visual display of these artifacts, VCU history graduate student Joshua Dow captured images of the object, using a cellphone to operate a digital camera on a tripod, snapping a high-resolution photo each time it rotated 10 degrees. After three full rotations, Dow had enough photos to allow him to render — via a technique called photogrammetry — a 3D digital model of the artifact. Dow performed this work in The Workshop, VCU Libraries’ makerspace on the lower level of James Branch Cabell Library.

Dow was an intern at Agecroft Hall when he worked on the 3D scanning and photogrammetry project. The 3D digital images Dow created will allow visitors, who are unable to, to see pieces from Agecroft’s collection in a more realistic way. Additionally, Dow’s 3D images will be posted online to allow anyone to explore the museum’s collection of Tudor and Stuart-era furniture, portraits and other artifacts from the 16th century.

“By putting these 3D images on the website, people will be able to get excited about [Agecroft’s collection] and we always hope that they will ultimately come and visit us and see it in person,” says Agecroft’s executive director Anne Kenny-Urban. “It’s a way for them to find out more about us and what we have, because we do have such an unusual collection for the new world.”  More about the project

The objects featured on the Cabell Screen represent a selection of objects mostly found on the second floor of Agecroft Hall. In order of their appearance on the screen are:

Roger Townshend: A rare portrait of a toddler during a time with high infant mortality, Townshend is around 2 years old. This full-length portrait has Townshend wearing the unisex clothing for infants, but the lace and satin show his family’s wealth.

Ball: Toys, like nearly everything from the Tudor period, were made from natural materials. This reproduction of a ball is made from a pig’s bladder.

The Gentleman’s Table: An early and rare example of an English joined table, this table shows evidence of continued use for more than three centuries. This table features curiosities that might draw an educated gentleman’s interest, as maps, exotic shells and other materials that reflect international trade.

Lady’s Gloves: A clothing item that marks the wearer’s wealth and status, gloves were often cut to allow rings to be seen through. These gloves are made of leather, silk, and silver.

Guestbook: This guestbook records the signatures and stories shared by visitors to Agecroft Hall in the 20th century during its time as a private residence.

Painted Bed Headboard: This headboard, from Agecroft’s painted bed, is carved with mythological figures. Satyrs and dragons adorn the bed, which still has the original and unrestored painted finish.

Rushlight: Rushlights were used in lieu of candles by poorer English people. A rush dipped in fat served as the fuel and light source, and these lights came in a variety of sizes.

Short Statue: This statue stands on the west end of Agecroft’s gardens.

Lady’s Room Chest: This frame-and-panel oak chest dates to the late 17th century. Chests were the normal form of storage for all types of household goods and items throughout the Tudor and Stuart periods.

Cradle: This oak and walnut cradle features a coffered bonnet. Most cradles were constructed to enhance the movement of rocking, and by doing so help an infant sleep.