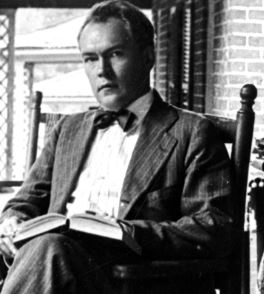 VCU’s Cabell Library is named for Richmond author James Branch Cabell (1879-1958). Cabell was one of the most famous American writers of the early twentieth century and has a distinguished profile in the history of American letters and many genres. Cabell was well-known to readers of his time and part of contemporary literary circles that included the likes of H. L. Mencken, Edmund Wilson, Sinclair Lewis, F. Scott Fitzgerald, and many others.

Established in 1972, the James Branch Cabell Associates serve to promote the work of Cabell and the success of VCU Libraries. Thanks to a generous grant of $200,000 from the Cabell Associates, VCU Libraries recently acquired a web portal and content site created and managed by fans of Cabell and began its migration to a robust contemporary technology platform. Ultimately, the site will be reconfigured into the Silver Stallion Virtual Center for Cabellian Studies and will bring to the digital world the past and current scholarship of Cabell, new access to his works, and the many letters and papers that are part of the Cabell Collection at VCU Libraries. This center will power renewed Cabell scholarship by exposing previously difficult-to-access original source materials to researchers, writers, and scholars around the world.

The gift also establishes VCU Publishing, a formal publishing imprint that will bring under one umbrella the array of publishing activity already managed by VCU Libraries and by VCU as a whole. Journals, books and digital projects created and managed throughout VCU will find a more visible and stronger home as part of VCU Publishing. With VCU Publishing, VCU Libraries provides a pathway to publish the definitive editions of all of Cabell’s works, available both digitally and through print-on-demand anywhere in the world.

Also included in the gift is renewed support of VCU’s Cabell First Novelist program for the next five years. This program is in its 19th year. John Englehardt is the 2020 winner for his book Bloomland and he will take part in activities to celebrate the award in the fall of 2020 at VCU.

Of the gift, Treasurer Bucci Zeugner said: “The James Branch Cabell Library Associates are proud of the growth and expanded outreach that has occurred within VCU Libraries in the past 20 years under the leadership of John Ulmschneider, and we are honored to have played a role in the physical transformation of the Library, which has made it the focal point of the VCU campus and the undisputed center of VCU students’ academic and educational experiences. This gift is a continuation of that support and seeks to build the infrastructure that is so vital to the health of a strong library. “