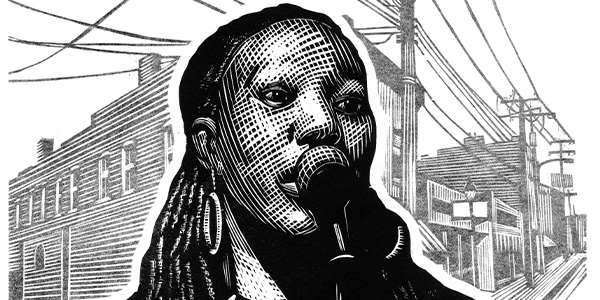 Thematically, his work engages with cultural amnesia, neglected public spaces, and the design of the contemporary landscape.

His work has been exhibited in five countries and seven states and can be found in many private and public collections, including the Valentine Museum, the Black History Museum of Virginia and the Library of Virginia.

In 2014 O’Keefe began his Black Luminaries series with three prints, “created to support reclamation efforts at East End Cemetery in Richmond Virginia.” The portraits were sold and all proceeds were donated to Friends of East End Cemetery. Then, in 2015 O’Keefe was commissioned by the Black History Museum of Virginia to expand his series with an additional two prints.

In 2021, O’Keefe collaborated with the JXN project to create Unveiling the Vanguard a series of 11 portraits as a part of a public history project in Jackson Ward. The portraits were converted into banners installed on the street around Jackson Ward as 15 streets, alleyways and public spaces were dedicated to Jackson Ward luminaries of the 19th, 20th and 21st century.

Unveiling the Vanguard has won a Golden Hammer for Best Placemaking Project from the Historic Richmond Foundation in 2021.