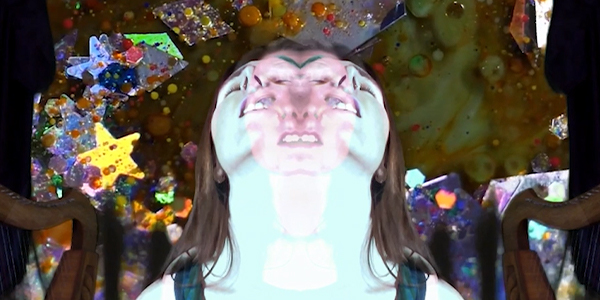 (Eli)zabeth Owens, a VCU alum, is a musician and video artist. Their ten years of classical training coupled with their experience in production and film sound design creates Owens’ unique sound and visual style.

“Knock Knock,” Owen’s sophomore album, is a continuation of “Coming of Age.” Told in three acts, it explores themes of sobriety, ego deconstruction and spiritual materialism.

“After escaping the Tower of Forgetting and reaching the edge of the broken kingdom in Coming of Age, our young hero(ine) now faces the mountains ahead. Countless grueling attempts at scaling the beast later, they find themselves bruised and alone at the bottom of the rocks. While searching fruitlessly for a way around the merciless ridge, our hero discovers a different route: through. The digging begins.”

Owens collaborated with VCU Libraries’ own Oscar Keyes to create the visuals for the album. Keyes, co-director and editor for the visual album, worked closely with Owens to develop visual aspects of the project.

Keyes (he/him/his) is the Multimedia Teaching & Learning Librarian VCU Libraries. He is currently a Ph.D student in Art Education at VCU, where he researches the role of embodied learning in digital-based methods of making. When he’s not busy teaching, Keyes still makes movies with his friends, having worked on award-winning shorts and feature-length films.

Keyes who worked mostly on the AI-generated aspects of the videos in “Knock Knock” said, “[they] were some of the most creatively challenging but also rewarding” pieces.

“Knock Knock” releases tonight through Grimalkin Records. Grimalkin Records is a trans and queer led record label and collective created to support and foster connections between queer artists (with priority to QTBIPOC), listeners, and their local communities and grassroots organizations.
Watch “Knock Knock” in its entirety on Grimalkin Records youtube. Explore more of (Eli)zabeth Owens work at elizabethowensmusic.com.