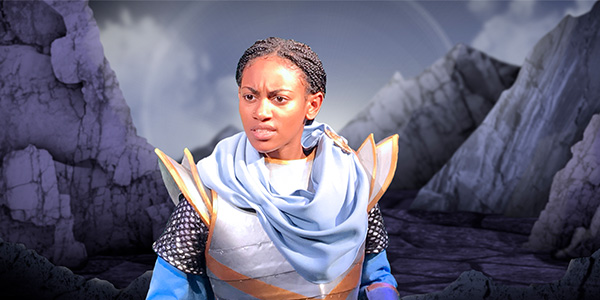 Running through the summer on the Cabell Screen selected images from the Class of 2021, Department of Theatre students. The exhibit features:

Mitchell Ashe (BFA ‘21) played Melchior in our mainstage production of Spring Awakening. This is the first scene where the two main characters, Wendla and Melchior, interact with each other. “Fellow classmate Kylee Marquez-Downie brought this awesome stubbornness to Wendla that was just a lot of fun to tease. In the scene, the two characters are sizing each other up, seeing what the other thinks about education, religion, charity, and poking fun at one another’s beliefs. It felt like we were on opposing sides of a tug-o-war game and didn’t really care who got muddy. Or at least we didn’t think we would care.” This image is a still from the final filmed production, Spring 2021.

Calie Bain (BFA ‘21) as Eve crying out in defiance to the Voice of God in the filmed production of El Eterno Femenino, recipient of a VCUarts Undergraduate Research Grant and filmed at Firehouse Theatre. This image is a still from the final filmed production, produced in Spring 2021.

Alvan Bolling II (BA ’21) produces a Horror Fiction Podcast “The Ghost Light Theater,” which brings haunting tales, poems, and plays to life through the vocal talents of himself and fellow collaborators, in hopes of showcasing artists from groups that have been marginalized for far too long, such as BIPOC, those that are Female-identifying, and LGBTQ+. It’s available wherever podcasts can be heard!

Donna Boyd (BFA ‘21) clowning in her final project for a third year movement class in December 2019.

Philip Bridges (BFA ‘21) toured in the high school production of A Midsummer Night’s Dream in Fall 2019.

Tevin Davis (BFA ‘21) as Elegba in the mainstage production of In the Red and Brown Water in February 2019. In this scene, a young Elegba has once again stirred the pot between himself and the neighborhood store owner by stealing. When the store owner angrily comes to confront Elegba and his family about the incident, Elegba seems to really enjoy the encounter. Photo by Aaron Sutten.

Khadijah Franks (BFA ‘21) as Maima in Eclipsed by Danai Gurira. Eclipsed is the story of five Liberian women and their tale of survival near the end of the Second Liberian Civil War. Photo by Aaron Sutten.

Austin Harber (BFA ‘21) worked on the mainstage production of Eclipsed, Fall 2019. “For the final scene, I wanted a slow transition from evening to night. Harber’s rendering represents the final “realism” cue where the sun has set and the moonlight shines through the forest. Symbolizing the ending of the narrative but more so the new beginning for the characters.”

Asjah Heiligh (BFA ‘21) played the role of Aunt Elegua in our production of Tarell Alvin McCraney’s hit play In The Red and Brown Water, February 2019. In this image, Asjah (center with arms upraised) dances as Aunt Elegua who “showed up to the block party to strut her stuff!” Photo by Aaron Sutten.

Jessica Jaffe (BFA ‘21) played the leading role of the Young Woman in the 2020 mainstage production of Machinal, February 2020. Loosely based on the grim true crime story of Ruth Snyder, the abstracted character of the Young Woman is pitted against the mechanizations of a patriarchal society and turns to violence. This  photograph depicts the moment of her execution by electric chair. Photo by Aaron Sutten.

Jet Jameson (BFA ‘21) played the role of Melitta and acted as Dance Captain for our filmed mainstage production of Spring Awakening, Spring 2021. In this photo, Jet is dancing to the song “Totally Fucked.” Photo by Aaron Sutten.

Scott Jones (MFA ‘21) is a graduate of our master’s pedagogy / performance program. Scott played George H. Jones in our mainstage production of Machinal. This promotional portrait was taken with a vintage camera to capture the dark 1920’s setting of the play. Photo by Kate Fowler, Studio Two Three.

Darren Johnson (BFA ‘21) as Miles in our first virtual mainstage production, She Kills Monsters: Virtual Realms. This image is a still from the final filmed production.

Kirsten Katt (BFA ‘21) was the costume designer for our mainstage production of She Kills Monsters: Virtual Realms—a play which moves between current day reality and an imaginary world in a “Dungeons and Dragons” campaign. This rendering depicts Kaliope, one of the fantastical characters in the DnD world, and one of Kirsten’s favorite costumes to design for the show. “I felt that Kaliope’s costume really brought the fantasy world to life for me.”

Kaitlin Kutchma (BFA ‘21) was costume designer for our filmed production of I and You, an ode to youth, life, love, and the strange beauty of human connectedness. This image is a rendering of the costume for Caroline, a sardonic and quick witted teenager (living with chronic liver disease) who gets pulled into a last minute school project by the athletic and popular Anthony.

Emily Mattison (MFA ‘21) filmed a musical number in an empty parking lot on Broad Street in early 2021. The department resumed work on a filmed version of Spring Awakening after the original production had to be put on hold due to the pandemic in March 2020. Emily functioned as Associate Director for the production and was on hand to provide artistic support for the first on location shoot.

Kat McMahan (BFA ‘21) as Vera in She Kills Monsters: Virtual Realms, the department’s first virtual production. This scene was filmed over Zoom in Kat’s own bedroom, and this is a still from the final production.

Trinitee Pearson (BFA ‘20) played the role of Tilly / Tillus the Paladin for our first virtual production, She Kills Monsters: Virtual Realms by Qui Nguyen. This promotional image shows Trinitee as the fantastical Tillius the Paladin in a Dungeons and Dragons campaign. Trinitee is in full costume with a virtual background designed for the show.

Crimson Piazza (BFA ‘21) acted as Co-Production Stage Manager for our filmed mainstage production of Spring Awakening, Spring 2021. Here he is checking in with all technical departments to make sure everyone is ready to film a scene. Photo by Aaron Sutten.

Amita Rao (BA ‘20) in the mainstage production of Sense and Sensibility, Fall 2019. Photo by Aaron Sutten.

Audrey Reed (MFA ‘21) studied costume design in our graduate program. In this digital art piece, Audrey not only works to expand their skills by incorporating various types of digital watercolor brushes but also features their beginning steps into drawing scenery.

Marisa Rigot (BA ‘21) starred as Pulcinella in our mainstage production of The Dentist—the department’s first in-person production since February 2020! The Dentist is a modern take on the traditional commedia dell’arte form of theater, with lots of physical comedy and laughs, April 2020. Photo by Meredith Speet.

Amari Samya (BFA ‘20) as Oya in the mainstage production of In the Red and Brown Water in February 2019. Photo by Aaron Sutten.

Nakira Seymour (BFA ‘21) played the leading role of Agnes in our first virtual production at VCUarts Theatre, She Kills Monsters: Virtual Realms by Qui Nguyen. The play moves between current day reality and an imaginary world in a “Dungeons and Dragons” campaign. In this promotional image, Nakira is seen in the fantasy setting in full costume in front of a virtual background designed for the production.

Sam Simpkins (BA ‘21) as a Filing Clerk in our mainstage production of Machinal, February 2020. Photo by Aaron Sutten

Laine Wagner (MFA ‘21) taught a special topics class in Children’s Theatre in Spring 2021. The culminating project was an outdoor, interactive (socially distanced and masked) devised children’s production of Peter Pan. This image shows Tinkerbell swooning as the fairies, Wendy, and a young audience member look on.

Hank Ware (BA ‘21) as Otto in our mainstage production of Spring Awakening during the number “My Junk.” “it’s my favorite song to perform because it’s such a cathartic release of emotion.” Photo by Aaron Sutten.