The Art of Mike Mingola 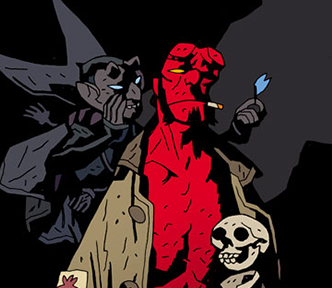 Runs in the mornings through Oct. 29

Comic industry giant, Mike Mignola is coming to Richmond to join in conversation Oct. 29 with TyRuben Ellingson, chair and professor of the VCUarts Department of Communication Arts. Mignola is best known for his distinctive art style and creation of the pulpy genre-bending Hellboy, a multimedia franchise rooted in comics and spanning live-action movies, animation, games and more. Blending elements of horror, detective fiction and super heroes, Hellboy has become a fan favorite since it appeared in 1993. In addition to his work as a graphic novelist Mignola has also served as a concept designer, production designer and executive producer on multiple films. On the eve of the release of a Hellboy movie reboot, Mignola sits down with longtime friend, Ellingson, for an evening of unscripted conversation.

In honor of this exciting campus visit, the Cabell Screen shows a few images of Mignola’s bold, distinctive works.

To learn more about the evening with Mignola, read this University Public Affairs news article.

The event is free and open to all; but seating is limited; and registration is required. Parking is available for a fee in the West Broad Street, West Main Street and West Cary Street parking decks. For more information, please contact the VCU Libraries Events Office at (804) 828-2951.