Reunion or not, classes stay current 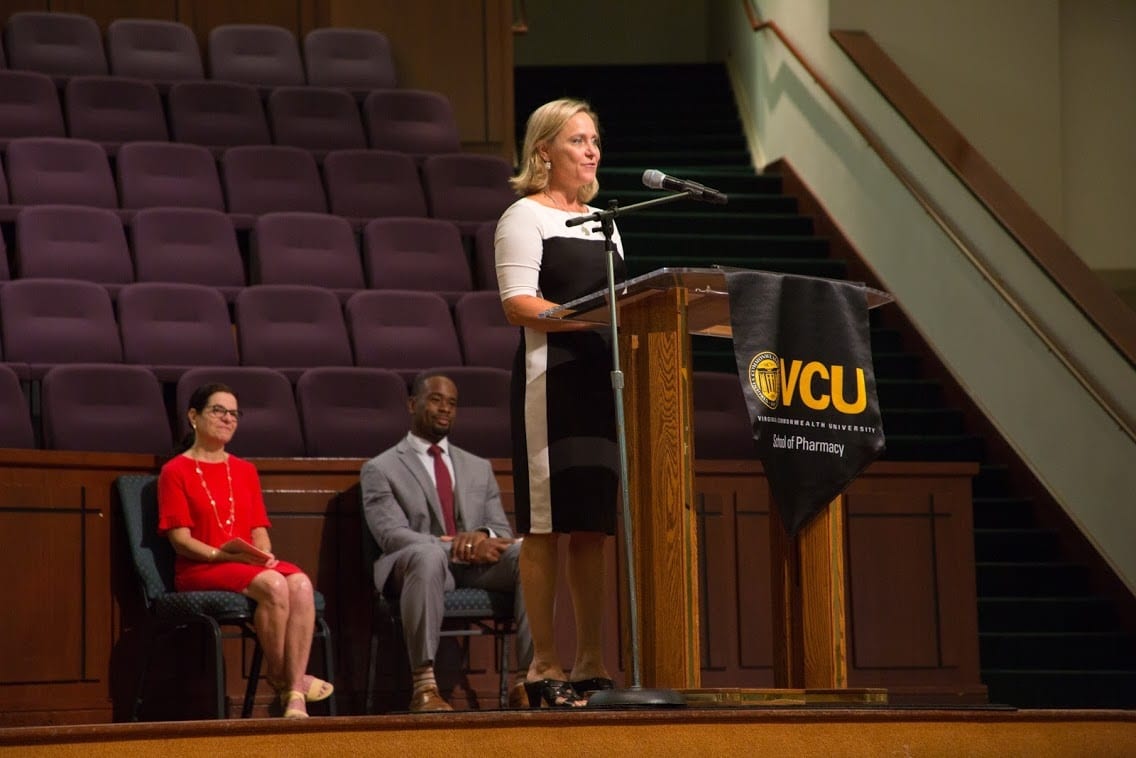 Alumni connections are forged on campus, maintained through the years

COVID-19 might be responsible for the cancellation of Reunion Weekend 2020, but it won’t cut the ties that have bound the thousands of friends and classmates whose paths first crossed on the MCV Campus.

Speaking of those ties, you know you’re a fan of your alma mater when you attend Reunion Weekend every five years. You’re really a fan when you agree to chair your Reunion committee.

Offering to host your class party, too? That puts you somewhere over the rainbow.

Michelle Herbert Thomas, Pharm.D. (B.S.’90/P), is one of those loyal alumni who has helped make class reunions possible. She can trace her involvement with MCV Campus alumni events to her senior year in the School of Pharmacy, the year she was in charge of the Class of 1990 school gift.

“I always stayed in touch and involved with the school,” she says. “That’s where my roots are. I think that’s important.”

Thomas did more than stay in touch with VCU throughout her one-year pharmacy practice residency with MCV Hospitals and even after earning her Pharm.D. degree at the University of Kentucky. She served as a residency preceptor for the School of Pharmacy for 19 years and was keynote speaker for the school’s Class of 2023 White Coat Ceremony.

Many of her own class of about 105 have stayed similarly connected with the school and each other. So this year — as she has done for the past few Reunions — Thomas volunteered to chair the committee and host the class party.

She always enjoys catching up with classmates and finding out what their paths have been. She also looks forward to the fun.

In 2015, Thomas hosted the class party at her home in Quinton, Virginia, east of Richmond. For Reunion 2020, class members were scheduled to meet at Mijas Cantina, not far from campus. “It’s a place our class used to go frequently,” she explains. “It used to be our old stomping grounds, the Shockoe Slip Café.”

Thomas likes to take advantage of Reunion events scheduled across the MCV Campus as well as those specific to the School of Pharmacy. “I really enjoy the breakfast with Dean [Joe] DiPiro, where you find out what’s going on at the school, and they do a good job with the open house tours.”

Whether the School of Pharmacy Class of 1990 celebrates its big 3-0 a bit late next year or doesn’t meet again formally till 2025, they are in for a treat — especially if they have never attended before — when the class photo album, maintained by class historian Kimberly Ward Goode (B.S.’90/P), is pulled out. It’s about 3 inches thick now.

Asked if she recalls any photographs in particular, Thomas laughs. “When we were in pharmacy school [senior year], we built a human pyramid with several classmates. We re-created that at our 2015 reunion.”

When she’s not encouraging and maintaining class connections, Thomas is a pharmacist practitioner in Quinton with Chickahominy Family Practice, where many of her colleagues are fellow VCU alumni. She also is immediate past president of the Virginia Pharmacists Association.

A bit of family trivia: Seventeen years before Thomas’ tenure as VPhA president, her sister Catherine Herbert Cary, Pharm.D. (B.S.’89/P; Pharm.D.’95/P), filled that role. And 17 years before that, their father, Daniel A. “Dan” Herbert (B.S.’66/P), served as president.

For Thomas, the inspiration to be an innovator and cutting-edge practitioner, as described in a feature in the American Pharmacists Association’s Pharmacy Today, “is very much from my dad … to be the impetus for change.”

School of Pharmacy emeritus professor Thomas P. Reinders, Pharm.D., was associate dean for admissions and student services when Thomas was a student and has followed her education and career.

“Along with her remarkable father and sister, Michelle has continued to display the leadership legacy of the Herbert family in Virginia pharmacy,” he says. “I have always been impressed with her leadership qualities and her commitment to excellence.”

Thomas also is committed to setting a good example for her blended family, five children and two grandchildren with husband Todd.

Her family, as well as Thomas’ colleagues and former classmates, should be delighted to know that if the opportunity ever arises to pose for another Class of 1990 human pyramid photo, Thomas is “not averse to or above it.”

Michelle Herbert Thomas’ father, Daniel A. “Dan” Herbert (B.S.’66/P), was at the height of his career, serving as president of the American Pharmacists Association, when he died in 2004. Richmond Apothecaries Inc. and Bremo Pharmacy, which he founded in 1976, remain in the family and have employed many VCU alumni and community pharmacy residents over the years.