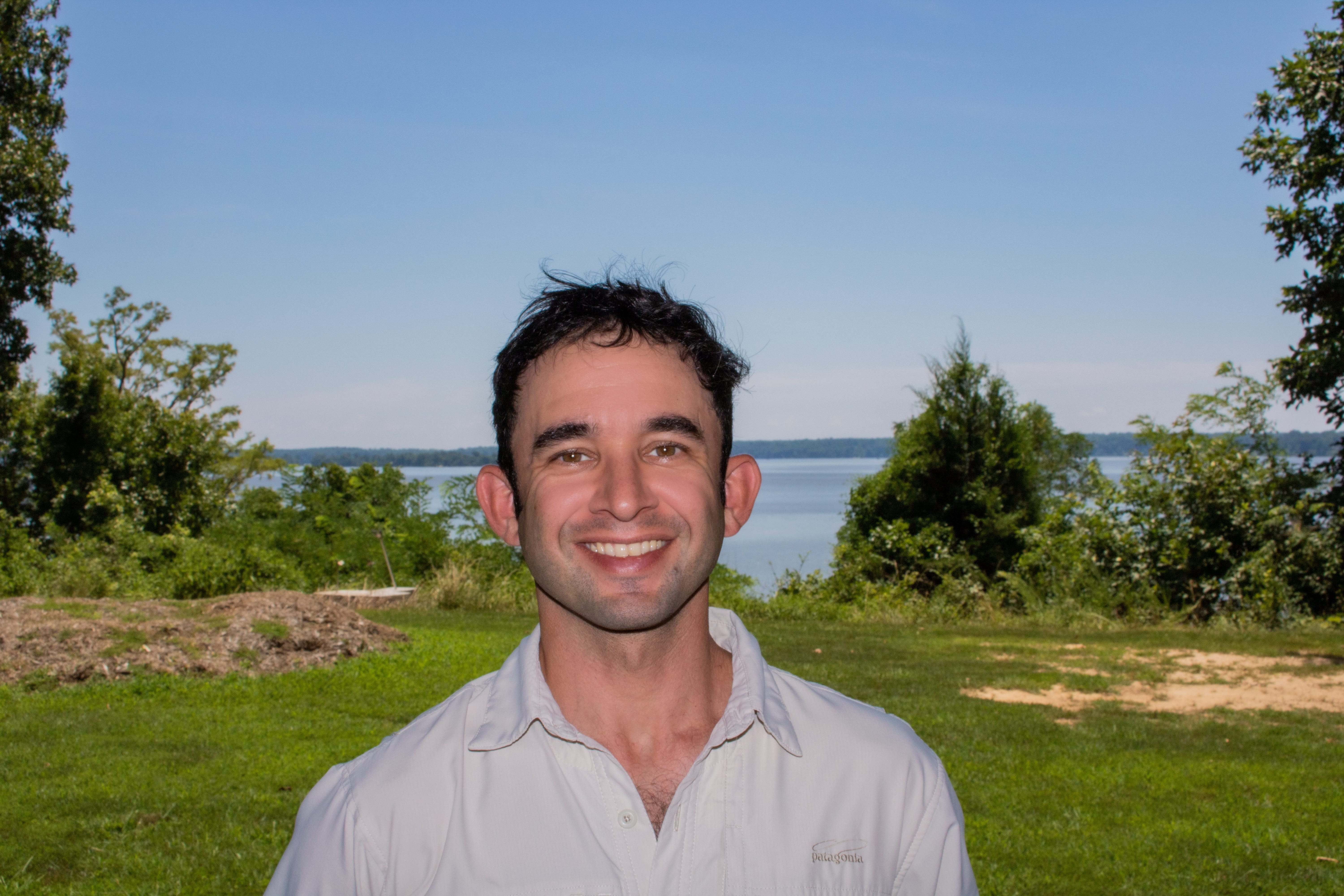 Wetlands researcher Ron Lopez (M.S.’17/LS) stands near a bluff close to where he does his research on elevation levels. Photo courtesy of Ron Lopez.

It was the middle of summer 2014 along the James River, near the Virginia Commonwealth University Rice Rivers Center in Charles City, Virginia. Graduate student Ron Lopez (M.S.’17/LS) was working with a team of wetlands researchers in a restored marsh, which had once been a tidal forest. The area had been heavily logged a couple of times at least. Rick Ward (B.S.’11/H&S; M.S.’14/H&S), a biology grad student, was studying the woody species in the area, seeking to construct a map of species in the original tidal forest. He had developed a complex 11-step process for the task, which, at this particular moment, amounted to hard labor.

Lopez helped the team search for stumps and cut out samples with a handsaw. “It was brutally hot and hard,” Lopez says. “I had done some outside work off and on, helping friends with construction, a little bit of stone laying.”

The wetlands work was different from anything Lopez had experienced, though. Hard as it was, he says, “I loved the work and I loved being out there and I was intrigued by the ecosystem.” Crediting the passion of researchers such as Ward and Edward Crawford, Ph.D., deputy director of the Rice Rivers Center, Lopez says that as soon as he started working in wetlands, he knew he wanted to stay there.

Now a faculty research associate in VCU Life Sciences, Lopez says he’s found his calling: He combines work as a researcher at the Rice Rivers Center with award-winning videography about science and nature. “A day in my life right now is very much a juggling act,” he says, but it’s an effort that fulfills multiple interests.

“Ron has this incredible double skill set that combines hard data and artistry,” says Greg Garman, Ph.D., director of the Rice Rivers Center. “He’s one of those rare scientists able to visualize the natural world objectively and subjectively, and then use those very different perspectives to encourage the study and conservation of natural resources. Ron is a unique asset to VCU’s Rice Rivers Center and a great example of a VCU alum.”

In his research, Lopez is working on a multiyear study, measuring water levels and sedimentation rates in tidal freshwater wetlands. The goal is to understand long-term trends in a changing landscape and the factors that might affect those trends; he expects to study the area for several more years before collecting enough data to begin drawing firm conclusions.

To set up his study, he installed benchmarks along the river shore, using a demolition hammer to drive metal rods 40 to 80 feet into the ground. “Those days were the hardest days of work I’ve ever done, without a doubt,” Lopez says, crediting the undergraduate helpers who stuck it out through the effort.

As a videographer, Lopez makes short documentaries, usually under five minutes long, to communicate topics in science and nature to a general audience. “Film is a really great conduit to make science accessible to the public,” he says.

His film, “An Oyster’s-Eye View of the VA Oyster Shell Recycling Program,” took the grand prize at the 2018 RVA Environmental Film Festival. The film uses a GoPro camera inside an oyster shell to give a quirky perspective on the life cycle of an oyster.

RVA EFF co-founder Scott Burger says that films such as Lopez’s have “become a really powerful feature for our festival, which also underlines our commitment to local filmmakers.”

Lopez used his prize money to buy a drone, which opens up potential for more unusual and innovative shots. “Shapes of the landscape can compose your image for you in ways you can never even imagine” without that equipment, he says.

Since his win, he’s made short films in partnership with the Virginia Department of Game and Inland Fisheries and has worked on an ongoing series about people who’ve lived near the James long enough to see it change over time. His passion project is to make a film about golden eagles in Virginia, which would cover conservation threats to the birds, including lead poisoning and wind turbines.

He also teaches film classes at VCU designed to help scientists use the medium effectively. He’s an enthusiastic fan of his students’ films, noting that the same skills can help scientists communicate their work more generally. “You learn which parts tell the story, and I hope [they] can use that in a lot of different ways,” he says.

While balancing these competing demands can be tricky, Lopez marvels at how perfectly his work satisfies his callings. People have sometimes asked him whether he would choose science or filmmaking if he had to commit to one, he says. For him, the ultimate commitment is to science. “If I wasn’t making films about science, I wouldn’t want to be making films,” he says. “Those are the stories I want to tell. It goes hand in hand.”

Below are several of Lopez’s films.