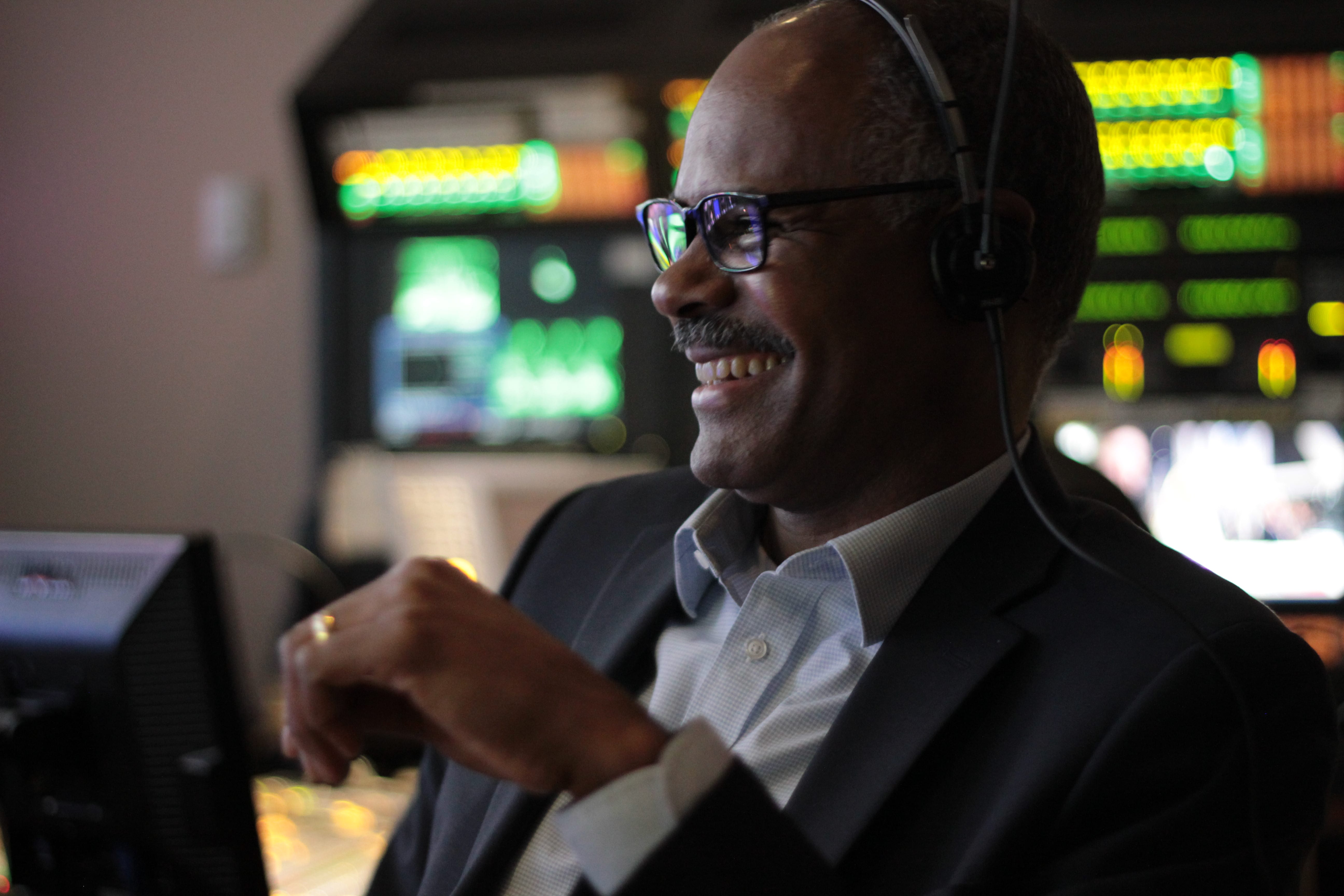 Blount on his last night of directing at NBC. (Photo by Demetrea Triantafillides)

Why did you choose VCU, and what was your experience like?

I chose VCU on the advice of John Edwards (B.S.’68/H&S), the publisher of my hometown newspaper, The Smithfield Times. John is the greatest and most life-changing mentor I’ve had. He’s now just plain family. He graduated from VCU’s predecessor, Richmond Professional Institute.

After allowing me to become a cub reporter while I was in high school, he concluded that I might have a knack for journalism. He drove me to VCU and showed me the school. After that trip, I knew where I wanted to go and what I wanted to study.

My time at VCU was one of the best seasons of my life. It was a comfortable and inviting place to find myself as a young adult. I was inspired in the classroom and enjoyed the social atmosphere. I liked the fact that there was so much space to be yourself. You didn’t have to adhere to some notion of what a student at this institution should be. We found strength in our individuality, and VCU fostered that. This made a huge difference in the person I became and the way I see the world. I wouldn’t trade my VCU years for anything.

You’ve had a career in TV and now as an author. Was writing and storytelling something you were interested in from a young age?

Yes, I have always loved stories. From listening at the feet of my elders, to sermons in church to the many books I read while growing up, I have always been moved by and educated by stories. Today, I often give speeches on how valuable stories were to my development all through my life and how they can be valuable to us all if we choose to take the time to really listen and let them sink in.

In high school, I found that I had the ability to write in a way that affected people. Through journalism, I learned to tell the truth through stories, and as a novelist, I love creating stories that speak to issues that I have lived or uncovered along life’s journey.

Where do you draw the inspiration for your stories?

Just living life and constantly looking at and feeling for the life around me. A bit of what makes a good journalist too, I think, is quiet observation.

The next book I am planning came from a that spoke to me about a particular issue. From that one lyric, I have created characters and a story.

My first novel, “Almost Snow White,” came from being a fly on the wall during a conversation between my dad and my grandmother. The second, “Hating Heidi Foster,” came from a glance during which I captured a brief but telling moment between my daughter and a lifelong friend that told me I needed to write a story about friendship. This is how it happens for me.

Can you tell me about your process for writing “The Emancipation of Evan Walls”?

I will tell you about the final push to complete “The Emancipation of Evan Walls,” because the story is a long one that takes place over many years and two earlier titles.

As it came down to the wire, over the final year, I was still working full time at NBC so I wasn’t able to spend my days as a working author. I had to write before work and then when I could at night. It can be difficult to get your head right for writing after work. I couldn’t take that moment to relax with a cup of tea and breathe before sitting down. So, I used music.

I love music, and there are songs that inspire certain emotions for me. I would find the music that spoke to the story, and I would listen to it before I began to write. Then I would read the last five pages I’d finished from my last session to grab the tone. Then I would let that carry me into the next sentence.

For “Hating Heidi Foster,” I listened to the soundtrack from the movie “The Road to Perdition.” For “The Emancipation of Evan Walls,” I listened to one song over and over and I never got tired of it and it still speaks to me today. The artists even allowed me to use a portion of the song as the epigraph for the book. The group is a wife and husband duo, Megan Jean and the KFB, and the song is “Hometown Hero.”

What prompted your transition from working in TV to becoming a full-time writer, and what’s been the biggest challenge for you?

Directing live TV really is a challenging but fulfilling job. I think particularly because I was directing news and events, sometimes bringing world-changing proceedings to air, I often felt like I was a part of history and those moments were what it was all about. I loved it.

However, it can also be quite a stressful job. After 38 years of it, 34 at NBC, it was time. I had a wonderful career for which I am immensely thankful, and it was time for me for recapture my passion for writing fiction. “Hating Heidi Foster” rekindled it, and I needed to follow my heart. I didn’t want to have to work around anything else. I just wanted to write, which by the way, I don’t consider work at all. It’s me.

VCU created my career path! I knew I wanted journalism, but it was the VCU mass communications school and a professor named Ted White that helped me find my way into broadcast journalism.

In time, the former director of the School of Mass Communications, Judy Turk, brought me back to campus. I began visiting classes and getting to know students. I spoke at a commencement ceremony, which was a great honor. Now, I sit on the advisory board for the Robertson School of Media and Culture.

My wife, Jeanne Meserve, and I have founded the Jeffrey E. Blount Scholarship at the Robertson School to provide the opportunity I had to other first-generation college students. All of this is a way of saying that VCU never left my life’s path. I went off in another direction for a while, but as you can see, I have found my way home.

Were there any books that helped you to form your voice as a writer?

Your books discuss the black experience in the early 20th century. What other books would you recommend to those who want to explore the topic further?

The first book to change my life, “Black Boy” by Richard Wright, and also “The Souls of Black Folk” by W.E.B. Du Bois, “Their Eyes Were Watching God” by Zora Neale Hurston, “Invisible Man” by Ralph Ellison, “Manchild in the Promised Land” by Claude Brown, “The Bluest Eye” by Toni Morrison, “Roots” by Alex Haley and “Go Tell it on the Mountain” by James Baldwin.