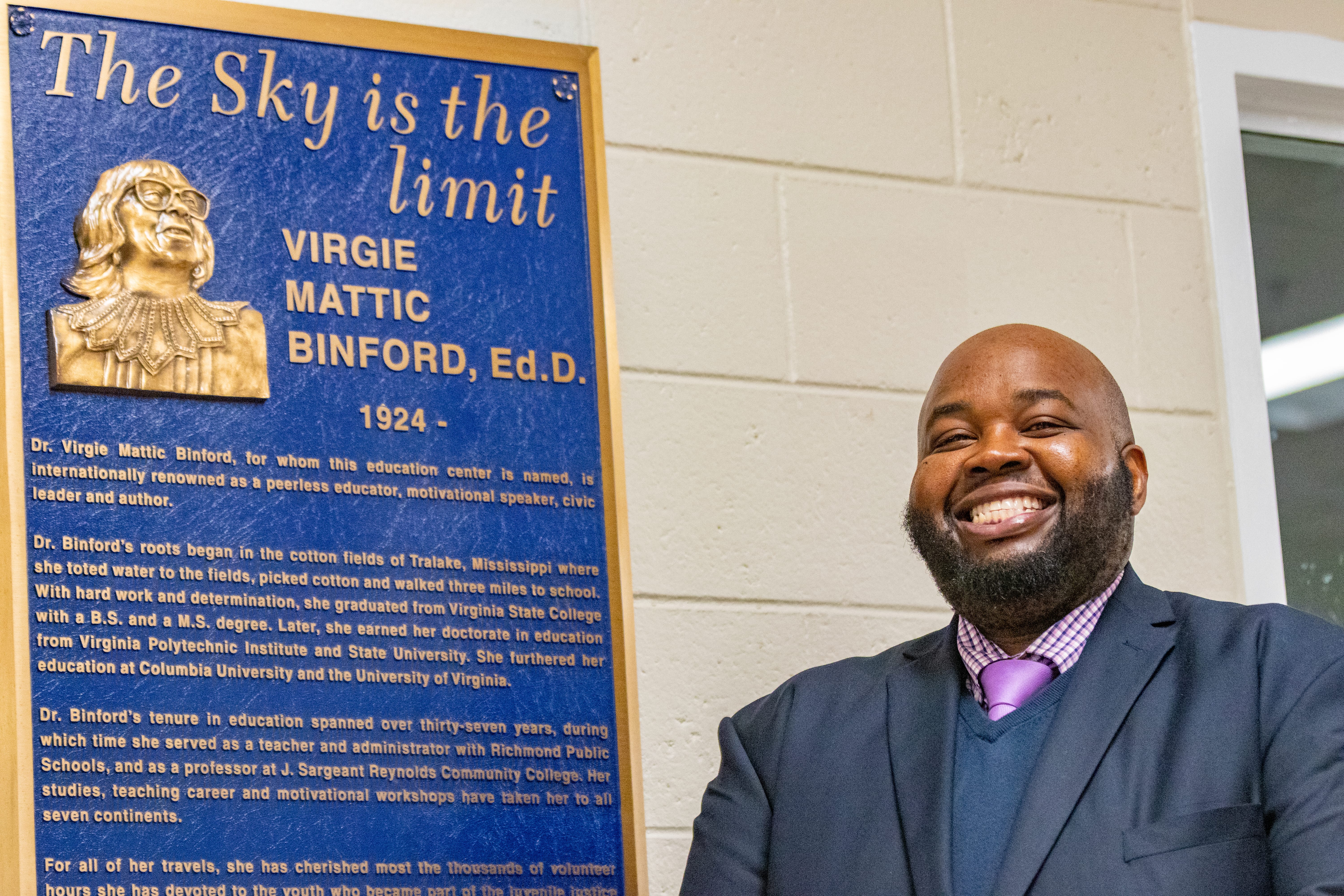 Rodney Robinson (M.Ed.’11/E), 2019 National Teacher of the Year, stands in the hallway of the Virgie Binford Education Center, which he has decorated with photos of inspiring African-Americans. Photo courtesy of Rodney Robinson.

The walls of the Virgie Binford Education Center, which serves kids housed in the Richmond (Virginia) Juvenile Detention Center, are covered with images of famous African-Americans—scientists, politicians, writers and others. Walking past the security checkpoint on the way to his classroom, Rodney Robinson (M.Ed.’11/E) explains that he posted the pictures to counteract the bare, institutional walls that had been there before.

For the past four years, he has taught history of all types to students in sixth to 12th grade, often together in the same class. His students are mostly boys, though genders are kept separate. Many of the students who arrive at the center haven’t been to class regularly in years, for reasons including chronic absenteeism or chaotic life circumstances that have caused school enrollment to fall through the cracks. Robinson sees one of his main duties as helping them to deal with trauma and confusion enough to reset and get on track. “It’s hard. A lot of our kids are far behind. I always say, ‘You don’t just end up here. It’s a path you travel,’” Robinson says.

He works with other educators at the center to create a plan for his students. In the meantime, he works to change their relationship to the classroom. “When was the last time you received positive attention at school?” he often asks. He has assigned projects such as researching the cultures behind Marvel’s popular “Black Panther” movie or researching universities. He also steers them toward books and historical perspectives that could help them learn to advocate for themselves.

Robinson, who has taught in Richmond-area public schools since 2000, was recruited to the center by its principal, Ta’Neshia Ford (M.Ed’06/E; Cert.’09/E). Before taking charge of Virgie Binford, Ford worked with Robinson at Armstrong High School in Richmond. “I saw firsthand his passion for at-risk students, his love of history and his mentorship for our male students,” she says. “It is so powerful to see his interactions with young men of color. As a historian, Rodney’s ability to bring full circle events of the past and present day is just amazing. He teaches through a lens that is very personal and profound.”

Deep social consciousness has motivated Robinson’s teaching from the beginning. He first became a teacher after being encouraged toward the profession by his mother, who was prevented from teaching by segregation and poverty. He taught at Richmond middle and high schools but began to feel burned out from the pressures of dealing with high-needs kids without sufficient supporting resources. He says the call from Ford reenergized him. “Rather than just becoming jaded or leaving the profession, I decided, what better way to understand the school-to-prison pipeline than to teach at an actual detention facility,” he says.

Robinson’s time in the spotlight has shone “a much-needed light on students with court involvement,” Ford says.

With Robinson’s recognition as one of the nation’s best teachers, Ford says, “everyone can see that excellent teaching can be found in the least expected places.”

The nature of the work, however, presents challenges. Students come to the center for periods of time dictated by their legal situations rather than what would be best for their education. As a result, Robinson may teach them for months, weeks or days. Rules intended to protect students’ safety and privacy prevent Robinson from forming the sort of long-lasting relationships that can make a teacher influential over time. He isn’t allowed to stay in touch with the kids or ask other teachers about how they’re progressing after they leave the detention center. “That’s very sad for me as a teacher because I want to know how you’re doing,” Robinson says.

Bad basketball and good mentorship
Outside the window of Robinson’s classroom, some of the students are playing a pickup basketball game. Robinson gets distracted by the game frequently and puts his hands over his face or shakes his head. “Some of the worst basketball games you’ll ever see are out there,” he says.

This turns out to be a key part of his point about what these kids need. “We need more programs if we want to keep our kids off the streets and active and productive and out of the prison pipeline. We get horrible basketball games because we get kids that were never taught how to play basketball,” he says.

The attention he’s received as a finalist for National Teacher of the Year has given him the chance to give speeches to groups who will listen about the need to fund programs for at-risk kids, to build detention centers that are more conducive to learning and to find positive role models for students throughout the school system.

“One of my big platform issues is getting more black males, more underrepresented males, into education,” Robinson says. “There are so many negative images of what a black male is supposed to be. And when you’re raised in a society and school system that doesn’t really value black males, it’s confusing.”

As evidence of the impact of positive black role models, Robinson points to a recent study from Johns Hopkins University that found that black students were 13% more likely to enroll in college if they’d had one black teacher by third grade.

Doron Battle, an African-American exceptional education teacher at George Mason Elementary School in Richmond, had Robinson as his U.S. and Virginia history teacher in 11th grade at Armstrong High School. Battle credits Robinson with influencing him to become and remain a teacher. The two stayed in touch over the years, and Battle often turns to Robinson for guidance.

“There’s a way we’re cut from the same cloth,” Battle says. “He taught me, he came from the same culture and he understands what it takes to do the work. His sharing knowledge with me bridges and closes the gap.”

While Battle says there are days “where you feel like you’re doing it in vain,” he adds that seeing Robinson get recognition now is motivating and inspiring. “It’s like your homeboy scoring the winning touchdown. Every time I see it, I’m ecstatic, like, ‘Let’s go, Big Rob! Keep going!’” Battle says.

Editor’s note: This story has been updated to reflect the April 24 National Teacher of the Year announcement.