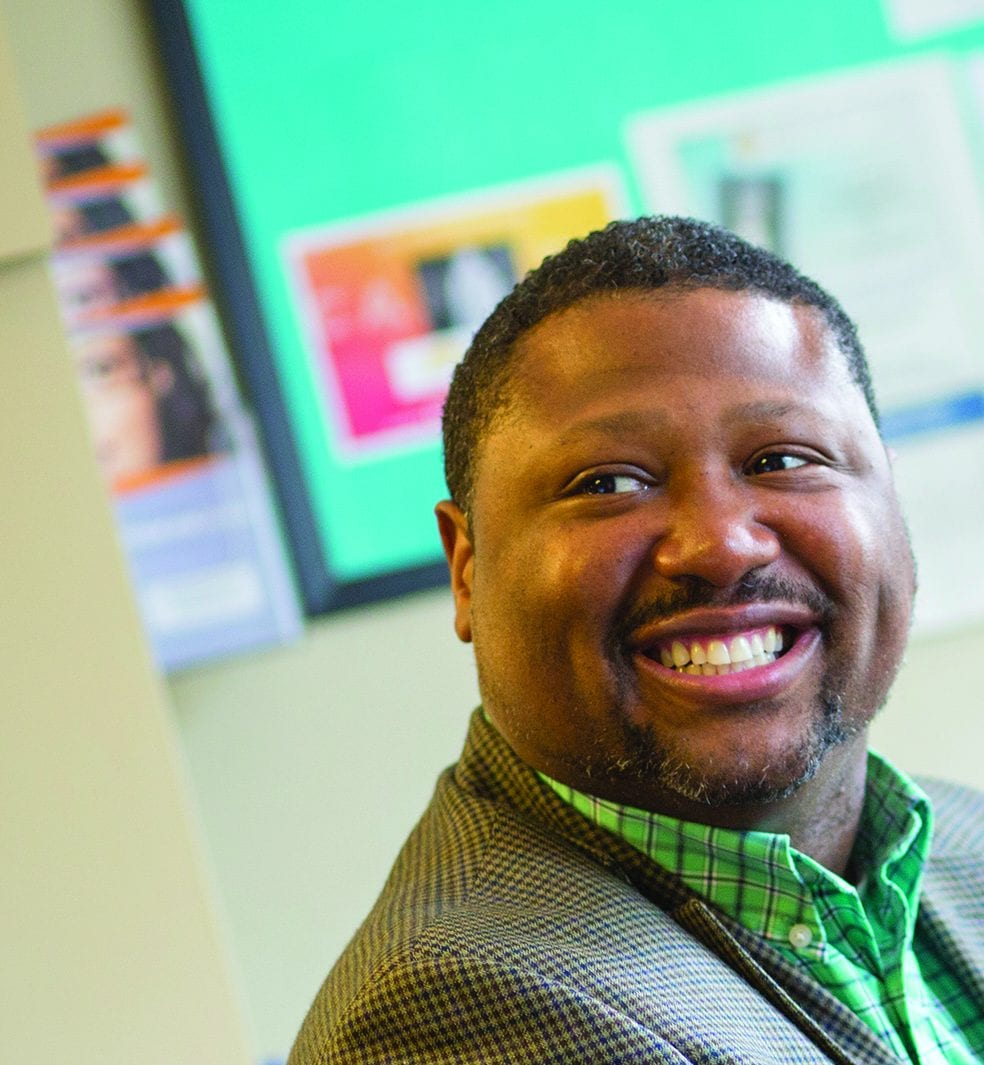 As companies and organizations wrestle with how to increase diversity, often under public scrutiny, Oscar Holmes IV, Ph.D. (B.S.’02/H&S), works to understand what happens when they foster inclusion and how they can maximize productivity in the process.

Holmes, assistant professor of management at the Rutgers University School of Business-Camden in New Jersey, has a lot of practice explaining why businesses should work toward diversity and inclusion. He’s good at describing how these efforts can impact sales numbers, open up access to new markets or increase efficiency within an organization.

Even as he studies these things, he wishes he didn’t have to use those sorts of justifications. “It should not matter if a company loses money if they do the right thing in terms of diversity, and that’s a bold statement we need to move toward,” Holmes says.

Holmes says he’s keenly aware of how diversity and inclusion are needed to make life better for people in underrepresented groups, himself included.

An African-American man, he vividly recalls the first time his race was used to insult him. “It was a pivotal point in my life that made me think about the identities we have and what they mean to us and to other people,” he says. He says that when he came out as gay later in his life, that added a new layer to his experience of identity and its effects.

Though many management-related topics interest him, Holmes says he feels a sense of responsibility to focus his research on diversity and inclusion. “Many times, for racio-ethnic minorities and other minorities, you don’t have the luxury to ponder about things that don’t necessarily impact your communities in a substantial way,” he says.

Holmes says he always sought to make an impact, but it took him a while to settle on how to do it. A survivor of pediatric cancer who had been treated at VCU Health, Holmes came to VCU for his undergraduate degree and volunteered to work with cancer patients and their families. He was interested in the medical profession and gravitated toward clinical psychology.

A class on industrial and organizational psychology with James Burke, Ph.D., now director of the Performance Management Group at VCU, changed his mind. “Considering that we spend so much time in our lives at work versus with our loved ones, I really wanted to make work more pleasurable and enjoyable for people,” Holmes says.

This led to doctoral studies in organizational behavior and management at the Culverhouse College of Business at The University of Alabama. At first the shift was motivated by the desire to make himself more marketable, but as his career has progressed, Holmes has settled into his choice and looks forward to playing a role in changing the landscape of business.

“I feel I can do a lot of good in society if I can instill these types of values and motives in people who are in the business world,” Holmes says.

A recognized teacher and researcher

As a business school professor, Holmes has been recognized for his teaching and his research. He was honored in 2018 by Poets and Quants, a publication that tracks business schools, as one of the 40 best professors under 40. A recent paper on diversity and firm performance was published in the Academy of Management Annals, one of the top journals in the management field, and received one of 2018’s Bright Idea Awards from the New Jersey Policy Research Organization Foundation and the Stillman School of Business at Seton Hall University in South Orange, New Jersey.

“I resist the either-or notion that if you are good at one then you must be bad at the other. There are so many mentors of mine who are great at both [teaching and research],” he says.

One colleague who has discussed research projects with Holmes and read many of his articles praises both the quality of his work and the importance of his connections with people. “He does extremely good research that’s sound methodologically and conceptually,” says Myrtle Bell, Ph.D., a professor in the Department of Management at the University of Texas at Arlington who focuses on diversity, social issues and human resources. “More than that, he does research that matters to people and society. What he does in the community also shows his commitment to doing work that matters.”

Each semester, Holmes asks his students to partner with four to six nonprofits, working to help them raise funds and awareness. His students have helped raise about $50,000 for organizations such as the Boys and Girls Club and Big Brothers Big Sisters.

As founding director of RUSE, the Rutgers University Student Executive program, Holmes helps high school students prepare for college and study business topics, with a particular focus on encouraging high-achieving students from underrepresented groups to enter the field of business.

Not just the bottom line

Holmes approaches consultative clients and students he teaches with a focus on helping create policies and practices that benefit organizations and their employees.

As common as it is to focus on “the bottom line” in the business world, Holmes says businesses often do things that aren’t motivated entirely by financial considerations. For example, he points to the expense of supporting segregation. “It makes financial sense to only have one restroom or water fountain. Clearly, companies could have made money if they served the black and Latino communities or other communities. But it was never an issue about finances,” he says.

In his research he works to clarify how diversity and inclusion initiatives actually affect organizations beyond blunt financial measurements. Holmes says that often these efforts can be very significant to individuals within an organization even if effects get lost in an overall financial picture. If clients from underrepresented groups don’t feel comfortable working with a business, for example, that might have a negative impact on particular salespeople, which could lead to low morale and have a ripple effect.

On top of that, Holmes emphasizes the importance of an organization’s reputation on social media.

He has also added a global element to his work, doing research in South Africa to gain an understanding of how leadership characteristics and stereotypes are seen from a different cultural perspective.

With all these efforts, Holmes values the chance to see them translate to real-world business practices.

He has helped the Philadelphia-based energy company Ecosave Inc., with diversity recruitment and selection. He also worked with the Arts and Business Council for Greater Philadelphia Designing Leadership, consulting on motivating and leading teams as well as on diversity and inclusion management.

He says he’s particularly gratified when he sees an impact through his students. “Many times, my students are going out into for-profit organizations and implementing procedures and policies that I hope will make work and life much better for them and their colleagues,” Holmes says.