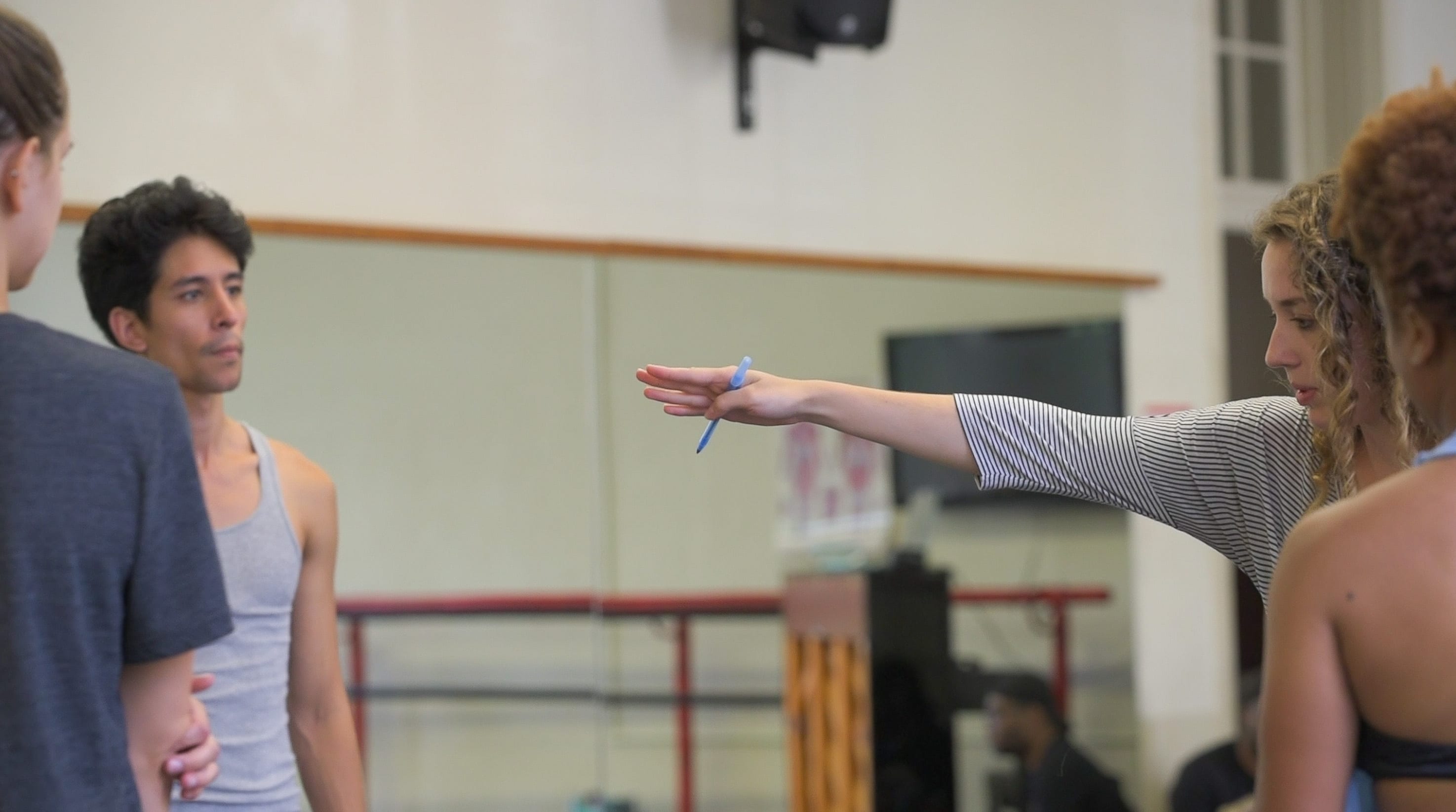 As the dancers run through dress rehearsal at the Grace Street Theater in Richmond, Virginia, she finalizes small elements, tweaking the spacing among a group of dancers and changing the backing projection when it doesn’t fade to black on cue.

Weeks before, at the VCU Dance Center, while fine-tuning the movements in practice that would eventually make it to the stage, one of the company’s dancers used a similar phrase, “dynamic change,” to describe the company’s creative process.

That spirit of constant adaptation and creative expression is what drew Robertson to dance from an early age, allowing her to create movements while providing a structure in which to frame them.

She took several ballet classes as a child and it was the summer before first grade when she knew she was hooked on dance.

“I remember all of the other girls wearing proper dance clothes, and I was just in a T-shirt and tennis shoes, but I told my mom this is where I wanted to be,” Robertson says.

When the school year started, she joined a preprofessional ballet company and saw firsthand how an artistic director, choreographer and technical crew collaborated to produce a show. By middle school, she had started choreographing for her school’s dance team and decided she wanted to pursue dance professionally, aiming to focus on choreography while still dancing as part of a company.

“[Choreography] is like a huge puzzle, and you’re trying to fit all the pieces together while knowing you’ll never really be finished,” Robertson says. “Being able to play with bodies in space, knowing that different movements and body languages can mean something completely different, is fascinating to me.”

Robertson left the ballet company after her sophomore year of high school and began to focus on modern dance, eventually coming to prefer the less-structured style that allows more expressive movement.

Not wanting to sacrifice her passion for choreography while in college, she sought out schools that provided an undergraduate choreography major that was integrated into a larger dance program. After attending the VCU School of the Arts’ Department of Dance and Choreography’s student showcase during her senior year of high school, she knew that Virginia Commonwealth University was where she wanted to be.

“I was blown away by [the students’] concepts and talent to create work. They looked like seasoned professionals or faculty members, and I wanted to create pieces like that,” she says.

Once accepted into VCU’s dance and choreography program, she excelled in the demanding six-day, sometimes 14-hour, schedule and presented original choreography in classes and in student and informal shows. Students were also encouraged to submit work outside of the university.

When her senior project, “Amid,” was chosen as one of three pieces to be performed at the American College Dance Association national conference at the Kennedy Center for the Performing Arts, in Washington, D.C., in 2016, Robertson couldn’t believe it.

“I remember being in the car with all of the dancers on our way back from the regional conference in West Virginia when we got a text message from our lighting designer that said my piece had made it, and we all started screaming with excitement,” Robertson says. “So much teamwork came together to make it happen and being able to see a new audience watch something that I created for the first time is the best feeling to me.”

Robertson graduated from VCU in 2016 knowing that she wanted to continue to create, share and choreograph work. She gathered six fellow VCU alumni, those she had met at performances and local dance teachers among others, and formed Karar Dance Co., which made its debut in April 2017 with a production that included two reprised works and two world premieres that she choreographed.

As usual, Robertson went into rehearsals for the company’s second production, “Across Disciplines,” with an open mind, collaborating with her dancers and making sure their individual artistic voices are heard from a piece’s conception to the finished product.

“A lot of times in the choreographic process I’m trying to figure out what Kara wants before she does,” says Corin Illsley-Gonzalez (B.F.A.’14/A), associate artistic director and dancer at Karar Dance Co. “I think we all love figuring that out for her and showing her what she wants without [necessarily] having verbal instruction.”

“The more we practice, I start to see the imaginary lines we use for spacing click into place,” he says. “There starts to be a union of the internal and external, mental and physical, that’s revealed through our bodies in motion.”

As the choreography progresses, the group continues to make changes together, refining their movements along the way, with Robertson helping the dancers adjust spacing and movement.

By the time the piece reaches dress rehearsal, she has coordinated with every performer to refine all of their movements and now makes adjustments on the stage where they will perform.

“I think [we’ve all] been dancing for so long that we hardly ever get nervous before going on stage,” she says. “Because creating the piece is such a team effort, when the performers get on stage they can feed off of each other’s energy and give it their all.”

Robertson is in the process of transitioning the 10-person company into a nonprofit organization, making it eligible to receive grant funding and donations. Her goal is to have a permanent building with practice space to house a school for modern dance and hold community classes and performances. In April 2018, the company also started Homegrown Choreographers to connect modern dance choreographers across the country and to provide a platform for them to promote and present their work.

“Starting your own company, especially something in the arts, is incredibly challenging,” Robertson says. “I’m extremely proud of what [we’ve] been able to build in the last few years, and I’m excited to see what the future holds for myself and for [Karar].”