‘I will always turn up for humanity’ 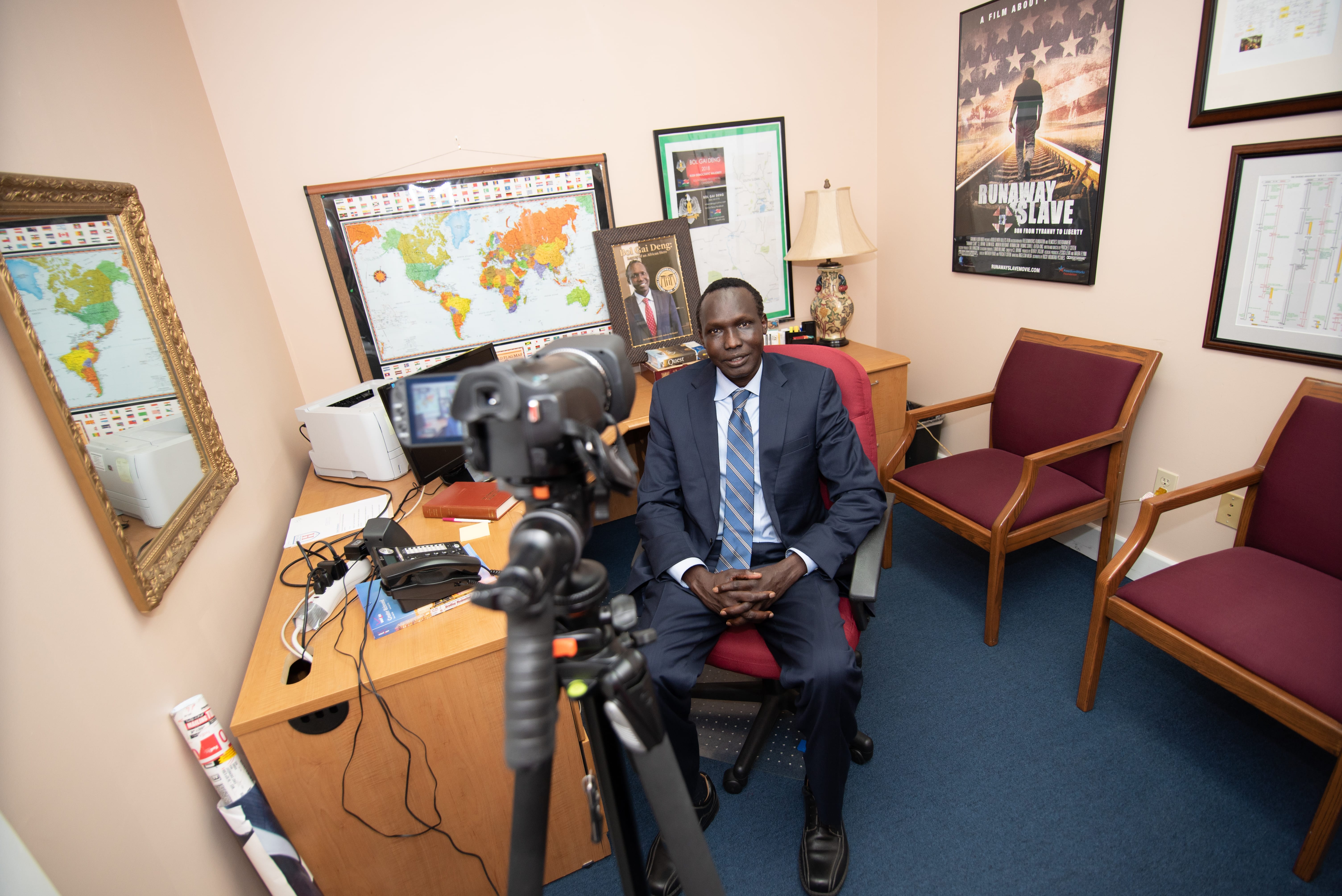 Bol Gai Deng (B.A.’08/GPA) is running for president of South Sudan, but no one can say when the election is or whether it will happen at all.

The east central African nation is the world’s youngest, having gained independence from Sudan in 2011. Less than two years after that moment, however, the country fell into civil war, and armed conflict has been ongoing ever since. According to Human Rights Watch, more than 4 million people have been forced to flee, and the effects on the nation’s infrastructure, economy and food supply have been devastating.

Salva Kiir, South Sudan’s first and only president, has been in power since independence. General elections were scheduled for summer 2015, then delayed until summer 2018. Deng and a handful of others, such as South Sudanese human rights activist Suzanne Jambo, geared up their campaigns, but Kiir’s administration again postponed elections, this time until summer 2021.

Deng, who came to the U.S. about 20 years ago as a refugee, has not given up on trying to become president of his home country. He believes that sufficient pressure from the U.S. and the United Nations could push Kiir to hold elections. Deng’s campaign involves holding rallies in Washington, D.C., and near U.N. headquarters in New York City, speaking at churches, traveling to Africa when he can (though he does not enter South Sudan for security reasons), working with refugee and immigrant populations in the U.S. and broadcasting speeches and Q&A sessions over social platforms such as Facebook Live. He recently published “Bol Gai Deng: Legacy of an African Freedom Fighter,” which tells the story of his life and political aspirations.

Deng came from desperate circumstances and now wants to bring hope to his people. At a young age, his village was destroyed, and he was kidnapped. After he escaped from slavery, the U.N. refugee program brought him to the States, where he was taken in by a church and a Virginia family. He attended community college and then VCU, where he majored in homeland security and emergency preparedness and took political science classes.

While at VCU, he became involved in efforts to help Sudanese immigrants and refugees learn to speak and read English, with a particular focus on women and the elderly. (According to the Pew Research Center, Virginia, with a population of more than 100,000 foreign-born Africans, is one of the states with the largest number of African immigrants and refugees.) He founded the Southern Sudan Project, a nonprofit that works to provide education to Sudanese youth, and says he received a great deal of help from professors and fellow students at VCU. He used the university’s facilities to teach classes, and volunteer teachers were plentiful.

“Political science at VCU did not make me become a politician. It had me become a human rights activist,” Deng says. “You realize that you are there to help people and make them also see the future or maybe just the potential they may not have seen before.”

This path eventually led him to launch his presidential campaign in 2016.

In some ways, it isn’t clear whether Deng is truly equipped for the task he has set for himself. For one thing, his presidential campaign requires expensive travel and security setups, and a GoFundMe page falls far short of its listed financial goal. He campaigns largely through social media, but the Facebook page for his campaign has fewer than 4,000 likes. He supports himself through a night job at Lowe’s, which does not give him the sort of international relations credentials one might expect from an aspiring world leader.

Deng, however, has backers. One of the most involved is fellow VCU alumnus Don Blake (B.S.’68/E), who leads the Virginia Christian Alliance, an organization that advocates for conservative Christian policies. Blake sees Deng as a potentially world-changing figure. “If we get him elected president, and we get a good government in there, with a new constitution and a free people and liberty and prosperity and freedom, then that will affect 14 million people,” he says. Blake provides Deng with office space for his campaign, as well as advice and access to political contacts.

Another of Deng’s supporters is freelance journalist Andrea McDaniel, formerly a morning news anchor for Richmond’s NBC12, who has known him for more than eight years. “Bol’s life is dedicated to helping his people back home,” she says. “It is all he thinks about. … He has been through unbelievable heartbreak and persecution, but has not lost his optimism and conviction that things can change.”

In addition to painting a picture of a passionate man who cares about people, McDaniel points to Deng’s “fearless” attitude. She tells the story of Deng’s May 2018 trip to East Africa, when he and his team were threatened and harassed in Uganda by South Sudan’s federal security director and his forces. Deng remained undeterred.

Ironically, if Deng were to succeed at his goal, many more hardships would lie ahead. If Deng could return to South Sudan, he would have to say goodbye to many comforts available in the U.S.

“Every time you turn around, you see McDonald’s, Burger King, WaWa, 7-Eleven,” he says. “This is a big deal, to leave America and go to a land where there’s nothing. But for the sake of humanity, because you have millions who are suffering, you have to.”

Even if he is not elected president, Deng says he will not give up on the cause of South Sudan. “I will always turn up for humanity, that is my dream,” he says.