Finding art in the every day: A conversation with artist and entrepreneur Earl Morris 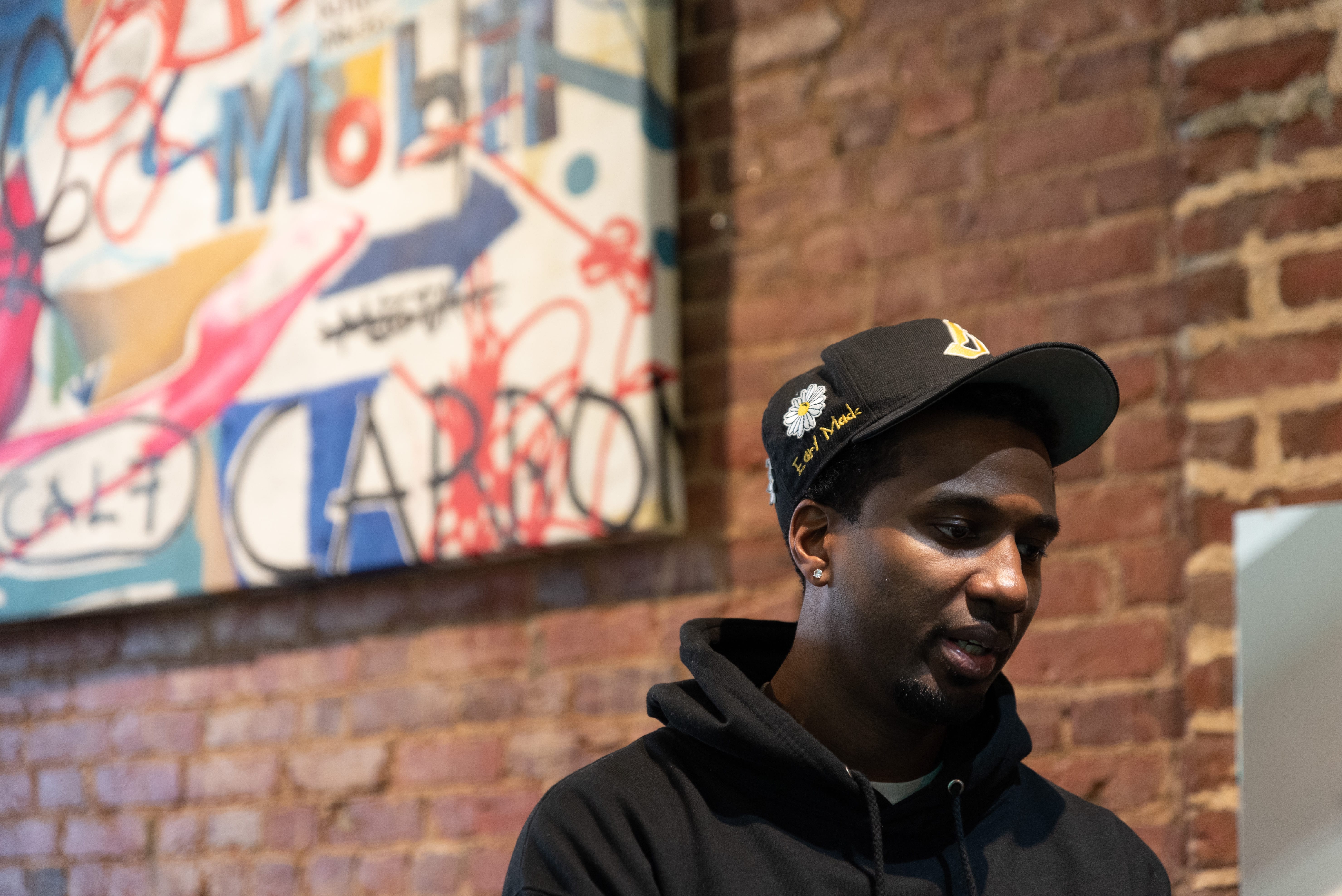 Earl Morris (B.F.A.’12/A), also known as Earl Mack, opened the brick-and-mortar location of his streetwear clothing brand, Chilalay, in October 2019. His love of art and design dates back to his childhood, and he continued to follow that passion as a student at Virginia Commonwealth University. In a recent interview, he talked about his passion for art and the meaning of, and story behind, his brand.

Was there a particular piece of art, or an experience you had with it, that made you want to become an artist?

I’ve always been into art. I think high school was when I started to take it seriously and started considering going to art school. I liked clothes and graphic design and wanted to learn more about that. My parents encouraged me to look into going to art school, so I came to VCU.

I knew art was something I could do at any time and that was therapeutic for me. I liked clothes and the graphic design side of art, too, so I wanted to learn more about it.

While I was in the Art Foundation Program, I heard that VCU had one of the highest ranked sculpture and extended media programs in the nation so I added it to my list of major choices.

When I started in the program, I had zero experience with making sculptures so when I got into the department it was a very trying time for me. I thought about dropping out of school three or four times because I didn’t want to do it anymore, but my grandparents helped me get to this place so I decided I’d stick it through and figure out what it is I wanted to do.

My adviser, Mary Eisendrath (B.F.A.’94/A), was a big influence on me staying in the department. She opened up my eyes to the different things I could do on the extended media side of the sculpture department and because of that, by the second semester of my junior year, my attitude changed. I had more conversations with my professors, and my adviser got me into a few fashion design, screen-printing and painting and printmaking classes because that was what I wanted to do more of.

Everyone says, “If you’re going to be an artist, you’re going to be broke.” But there are so many artists that I look up to who are making money off of the passion they have for it so I have to figure it out. How can I take the knowledge that I have and make something out of it?

Where do you draw inspiration from for your work?

These days a lot of my inspiration comes from the world that I live in. I watch a lot of movies, listen to music and am on social media quite a bit so I try to take a lot from the things that I see and experience.

I also look up to people like Virgil Abloh, Joe Fresh Goods, Ronnie Fieg at Kith, KAWS, Futura and Takashi Murakami. All of those guys are in the pop culture realm making incredible things.

I’m also inspired by my friends and the conversations we have. Sometimes a T-shirt is just a shirt, but sometimes the story behind it makes it mean more to you.

So how did you take Chilalay from an idea to a brand?

It really started in 2012 during my business partner Nikko Dennis’ (B.S.’12/B) senior year. We were hanging out with friends and the name just sort of came out of those moments where we were just chilling and relaxing.

We had the idea to do a pop-up shop, and there was a great space that’s now occupied by the Coalition Theater on Broad. So after reaching out to the owners and securing the space for a week, we brought brands in from Richmond, Hampton Roads and Northern Virginia.

That first event went well, and people were saying, “This is cool, we want to see more stuff like this.”

Our second pop-up in 2014 was at a much bigger space and we were able to have a full art gallery downstairs and in the shop upstairs we actually started making Chilalay-branded clothes.

The three stars on the Chilalay logo represent art, fashion and culture, and we were looking for ways we could bring that to life.

Tell us about the decision to open the physical space last year.

In 2016, I was designing for a few different brands while still doing art and murals. It became a lot for me personally and I knew I needed to get away from everything so I took a break to recenter myself. I moved to Charlottesville and worked on smaller pieces. When I came back to Richmond in 2017, we decided to make Chilalay into something.

There were still people wearing our original designs from our second pop-up, so it was like, “OK, we need to turn this hobby into a real business.”

At the end of 2018, in the same space we’re in now on Broad Street, I opened up The Pink Box. It was a collaborative installation between myself and another Richmonder that went from pop-up to store.

It was a really cool store that opened my eyes to the Richmond streetwear culture, being right here on Broad Street right next to Round Two and seeing people’s buying trends. We were considering another place on Second Street for Chilalay but it wasn’t ideal, so when The Pink Box closed in 2018, we jumped on our current space and have been working on it ever since we got the keys.

We had to pay for everything ourselves, so Nikko and I buckled down, worked part-time and odd jobs to earn the money to build out the storefront.

Chilalay is a huge part of my life now, and I’m happy to be a part of it. I wasn’t always sure where it was going to go or what was going to happen from it, but I learned how to work with other people, how to actually run a business and how to sell my designs and my art.

How do you find a balance between managing the store and still creating art?

The biggest thing now is finding the art in whatever it is I’m doing.

Right now I’m in the process of designing our next few drops, and I approach it the same way as I do painting. I try to figure out what the piece means to me and what I think somebody else will take away from viewing it.

I’m still working on the balance and get back to creating art the way I would like to, and I see Chilalay as one of my key pieces to be able to do that. I’m putting as much time and effort as I can here now so that in a year or two I can step back and do more painting.

I have a younger brother who’s also into art, and he paints all the time. I’d like to think that seeing me paint sparked something in him to pick it up and run with it, so I’ve been helping him when he asks. Seeing him paint so often has also been a big motivator for me to get back into it.

Where do you see yourself and Chilalay going in the future?

My goal is for Chilalay to be a name in Richmond that’s just as strong as Round Two, and spreading the message to chill and relax.

I’m trying to take it day by day, just putting one foot in front of the other. My dad always stressed to me that having a written plan that you can see is important, so this year I’m doing just that.

It was always taught to me to do unto others as you would have them do unto you, and I think it’s been interesting to take that mindset and apply it to a streetwear brand. We still like to have fun with our clothes, and we still have events, pop-ups, parties and art shows but we take it more seriously.

We even have the message here on the wall in the store: If you can fix it, fix it. If not, Chilalay until payday.