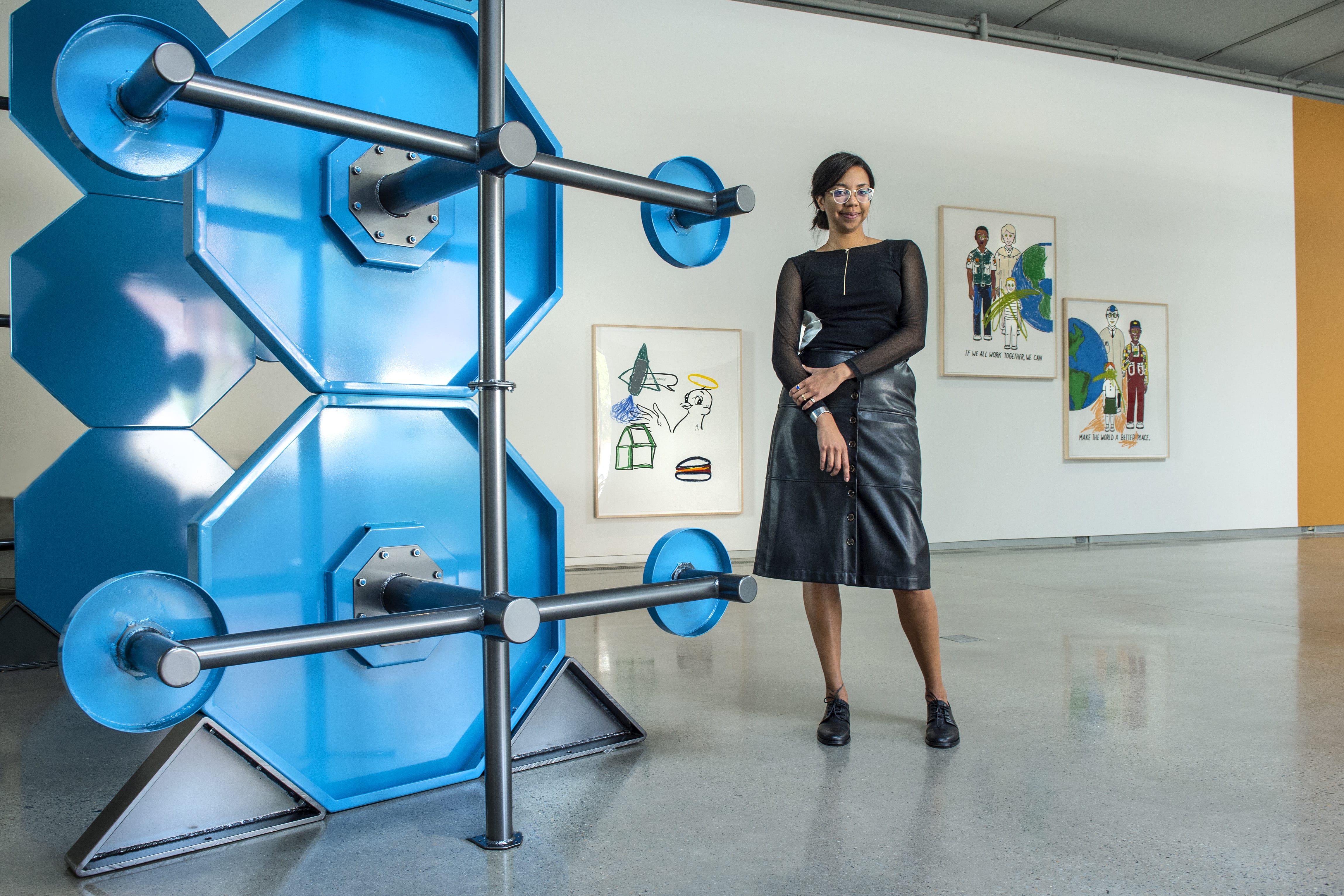 Lines. Our world is full of them. They govern our lives and shape how we feel. There is a sharp line between right and wrong, between left and right. There is a hard line between up and down and light and dark.

Just over two years ago, Amber Esseiva (B.A.’12/A), assistant curator at the Institute for Contemporary Art at Virginia Commonwealth University, began focusing on another line, the one between white and black. From that idea grew “Great Force,” Esseiva’s first solo-curated art show at VCU, which opens Oct. 5 at the ICA and which seeks to understand the constant force of black-white racial constructs throughout the country.

Esseiva, the child of a Swiss mother and a Senegalese father, grew up in France, where she didn’t see a racial divide. It wasn’t until she moved to Miami at age 13 that she realized the powerful line between races. It was then that the seed was planted to understand, even blur, that line through art.

After obtaining her undergraduate degree in art history from the VCU School of the Arts, Esseiva went to Bard College for her master’s degree.

She always intended to bring her new-found knowledge back to VCU, where she hoped to work with the ICA.

“I, at the same time, was frustrated at how distant art history could feel from the real lived experience of artists,” she said. “So for me, curating, and particularly curating in proximity to an art school, was really exciting. In art school everyone is constantly figuring stuff out, caught in the middle of things and concepts and that always felt like an interesting space.

“It means a lot to solely curate a show at the ICA. It feels like I’ve been waiting for this for a long time and also like it snuck up on me. It’s a huge opportunity and also one of the most daunting things I’ve done to date.” Previously, Esseiva was a guest curator in the Glasgow International biennial festival of contemporary art.

Esseiva has been researching the racial divide for several years while taking on increasing levels of curatorial responsibility, so this was a natural next step, said Stephanie Smith, chief curator at the ICA.

“Amber approaches her work with passion, a bold intellect, and a sharp sense of humor. That’s a powerful combination, and it’s made even stronger by the care for art, ideas, and others that shines through Amber’s curatorial practice,” Smith said. “It shapes public projects like ‘Great Force’, which she developed through deep, creative dialogue with artists, writers, designers and other collaborators. It’s also there in less visible but hugely important behind-the-scenes ways, like her commitment to the many VCU students that she teaches and mentors.”

When Esseiva began talking to artists about the idea behind the show, she was motivated by personal experience.

“Thinking about this moment in time in the art world where people of color are getting a lot of representation, and they are getting a lot of exposure within museums, within galleries, the general cultural realm. Oftentimes there is a pressure to perform,” Esseiva said. “Ideas of black syndication, or pain with that visibility as a way of correcting histories on behalf of institutions.”

“Great Force,” which made The New York Times’ list of shows not to be missed this fall, runs through Jan. 5 and will include photography, painting, sculpture, video and performance by 24 artists. The robust program of artist performances and public events related to “Great Force” will bring together thought leaders from the Richmond community and beyond.

New works commissioned by the ICA for the exhibition include a site-specific public drawing on the ICA’s glass-filled facade by Tomashi Jackson and a multimedia installation by Xaviera Simmons that will include images, furniture and sculptural works that present a vision of American policy through the lens of disenfranchisement and oppression.

Staged within the ICA’s Learning Lab, Poet Claudia Rankine will present “The Racial Imaginary Institute,” featuring free public reading groups and discussions responding to the exhibition’s theme. The institute comprises interdisciplinary artists, writers, knowledge producers and activists who address race as an invented concept and explore its role in our daily lives.

Performances and interactive events include Alexandra Bell’s “Counternarratives,” which explores how racist narratives are perpetuated through language and news media, and a collaborative citywide project, “Colonial White,” that asks participants to photograph a white paint chip with an object or situation that embodies whiteness.

“To me, the idea is really for people to reflect on our trivializing a word like ‘colonial,’ erasing a history of oppression and, in that way, neglecting the structure of racism,” said artist Charlotte Lagarde. “So for me, ‘Colonial White’ is an invitation to reflect.”

“Colonial White” is an important aspect of the show, Esseiva said, because it’s one of the few projects that includes a white artist taking up whiteness as a subject and construct.

For more information about the ICA and “Great Force,” visit icavcu.org.

This story was originally published by VCU News.