A passion for public safety 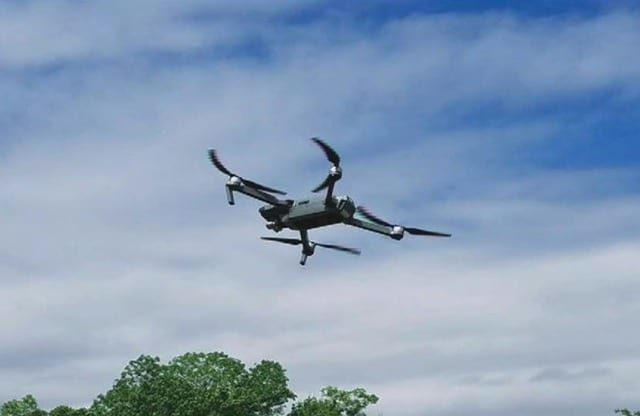 The Mavic Pro drone, one of the models being used by the unmanned aircraft system public safety team in Henrico County, flies during training. Photo courtesy of Michael Roth.

An elderly man with Alzheimer’s disease gets lost in the neighborhood one night. Robotic assistance comes as part of the search and rescue team — a drone that can home in on a specific heat signature of 98.6 degrees, cutting through darkness and noise to find the missing person.

A structure fire erupts in a big-box store. From the air, a drone monitors hot spots and ensures that water streams are reaching them to slow and stop the fire’s spread.

A train jumps the track. A drone flies in to assess the potential for follow-up explosions before first responders arrive, helping ensure they stay safe.

These and other uses for unmanned aircraft systems, commonly known as drones, are now possible in Henrico County, Virginia, and VCU alumnus Michael Roth (B.S.’15/N) put together the team that can do it. Roth, who was recently promoted to captain in the county fire department, spent two and a half years studying the possibilities of drone use in public safety and training and building the Henrico team.

The team went into the field in January and has so far helped with several search and rescue missions, gathered information about damages from tornadoes and worked on preventive measures for large public events, such as standing by to help in case children went missing at Fourth of July celebrations.

Roth, who knew by his teenage years that he wanted to be a firefighter, was drawn to the work more by his passion for public safety than by a particular love of technology. “It didn’t actually stem from me raising my hand and saying, ‘I love drones,’” he says. “I knew very little about drones before getting into all this.”

Roth was asked to put together a specialty team that could use unmanned aircraft systems for public safety by Mike Cox, who was chief of administration for the County of Henrico Division of Fire at the time. Roth had by then established himself in the county as a go-to person for managing large, complex projects.

For example, fire departments create “preplan books” for buildings the department is responsible for protecting, with information such as evacuation routes, building construction and other data that can help firefighters work safely and effectively in an emergency. About six years ago, Roth was tasked with helping convert the hard copy preplan books to electronic files that could be integrated with mapping software, giving firefighters more immediate access to the information.

Then he was recruited to help revamp how the county responds to 911 calls. In recent years, calls for emergency services have grown at three times the rate of population growth, but it became increasingly difficult for Henrico County to maintain enough paramedics and ambulances to handle the call volume.

Roth and his colleagues plunged into an assessment of the types of calls the department receives, sorting through more than 5,000 classifications. They triaged them and redesigned the system so emergency vehicles now come with basic or advanced life support. The basic life support fleet is dispatched to less serious situations, so the advanced life support fleet can focus on life-threatening situations, where they’re needed most.

“Michael’s a very smart guy, really well organized, really detail oriented,” says Phillip Lathrop, a fire station captain for Henrico County who was the project lead for the emergency medical dispatch and emergency fire dispatch projects. He says the overhaul of the county’s response capabilities and 911 system was one of the biggest projects Henrico has ever undertaken, and he knew he wanted Roth to help. Lathrop and Roth both joined the department as part of the same recruit class in July 2006. “I wanted someone who had the capacity and the skill set to look at everything and not miss anything,” Lathrop says. “He’s been an asset.”

Roth took on the drone project with the same enthusiasm and organizational skills he brought to his previous assignments. “What I found fascinating from a public safety standpoint is how much of a force multiplier [drones are] and how much more efficient and safe they can make our operation,” he says. Though his new position as captain means he no longer actively manages the drone team, he continues to advise them. Roth has also recently joined the Piedmont Virginia Community College public safety advisory board. The college was the first in the U.S. to receive Federal Aviation Administration authorization to conduct R&D of drones for public safety, and as part of the board, Roth helps review the college’s drone-related public safety curriculum.

Roth sees his VCU degree in nursing as an integral part of his background, rounding him out as an effective public safety professional. He describes Henrico County’s public safety team as “a very all-hazards department,” and says his knowledge of medicine and public health informs his work on projects such as the redesign around 911 calls. His love for medicine goes even further. Besides his full-time work as a fire captain, he also works part time as a hospice nurse. In that role, he says, he can help people over a longer term, not just in the heat of an emergency. “It’s a meaningful thing to be part of, and that’s why I continue with it,” he says.

His heart remains with the fire department, however, where he hopes to contribute in creative and progressive ways. “I love what we do and I love what the department stands for and what our mission is,” Roth says.