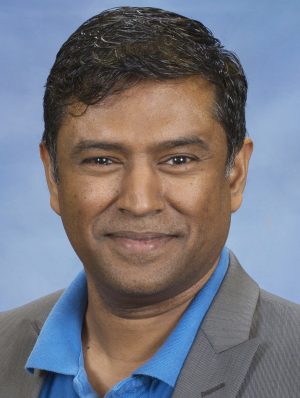 Dayanjan “Shanaka” Wijesinghe, Ph.D., an assistant professor in the Department of Pharmacotherapy and Outcomes Sciences at Virginia Commonwealth University’s School of Pharmacy is the first da Vinci Center Faculty Fellow.

“People like to say, ‘I’m doing arts, I’m doing science.’ No, no, no,” he said. “You are both doing art. It’s creating something brand new with the tools that you have. It’s art that’s based on a logical process, that’s true. But it’s creativity at its heart.”

The assistant professor in the Department of Pharmacotherapy and Outcomes Sciences at Virginia Commonwealth University’s School of Pharmacy is the first da Vinci Center Faculty Fellow. Wijesinghe’s commitment to collaboration across disciplines brought him to Garret Westlake, the center’s director.

“He actually reached out to me,” said Westlake. “I think it was my first week at VCU, and he said, ‘I would like to be more involved with the da Vinci Center, I wanted to get your ideas about where you see the center going in the future.’”

The faculty fellowship’s purpose is to highlight VCU faculty who champion cross disciplinary collaboration and innovation. Wijesinghe saw an opportunity to bring pharmacy and da Vinci students together to inspire entrepreneurship and creative thinking. He sees collaboration between the two as a ripe opportunity for student startups.

“Thinking outside the box, bringing the right people together and getting things done. That’s pretty much what we are trying to do here,” Wijesinghe said.

Wijesinghe recently sat down for an interview to discuss his roots as a scientist, and what intrigues him about the future.

What excites you about this fellowship?

What we are not doing in science, what we shy away from, is taking our research beyond the science, to other people. People who are not biomedical scientists, but who might be a mechanical engineer, might be somebody just tinkering in their basement. But, those guys might have the next big idea, that comes from your idea. It’s going to really speed up the pace of research and development; that’s what excites me. You can act as a catalyst for something much greater than you.

Whatever we are building, we are going to start releasing it, so that somebody else can take that and go one step further. We cannot keep hogging the science to ourselves. We are funded by the taxpayer. This information we gather from our research has to go back to the taxpayer. It’s all about generating the data, and creating the necessary infrastructure to enable the next break in science as fast as possible.

Would you say communication between fields is crucial?

You can contribute a lot more to the community, and the world we’re living in, if you start talking with other people.

In this day and age you cannot be a lone wolf doing your own work. Well, I guess you can, but you can contribute a lot more to the community, and the world we’re living in, if you start talking with other people. Just have a conversation.

Did you always know you wanted to be a scientist?

I knew. I knew from a very young age. I must have been 6 or 7 years old at that time. I’m from Sri Lanka, right. Not a whole lot of money and all of that. We had these textbooks that are black and white [photos]. They taught us about the rings of Saturn, and it’s like a very grainy picture there, and I really wanted to see what the rings of Saturn look like. I wanted to have a telescope. And, believe me, growing up in Sri Lanka, nobody had a telescope. So I just went to the library and they had this really beaten up, old book that told me the magnification power of the telescope. Then, [there was] some construction and [I found these] PVC tubes, so I got my lengths of tubing together. [Then,] there was a guy who was making eye glasses in the village …

You built a telescope?

What is the future of science?

Imagine this. Whenever a patient comes into the hospital, we draw a small sample blood from them. Now, if we have an automated system, a robotic platform that processes the sample, a mass spectrometer that captures large swaths of biochemical data, an A.I. that de-identifies patient information and curates the data and amalgamates it with clinical data and finally, a data visualization tool that abstracts and presents all this in a way that is easily understood. If we set up this work flow and we start accumulating this data centrally and open it up to the rest of the world, anyone from any corner of the world who’s interested will get access to that data. First, the cost of biochemical research drops drastically as costly studies and instrumentation don’t have to be repeated as often and a solid data foundation is now available for others to build up on. On top of that, there’s going to be a thousand different eyes looking at this data. So, any questions you have with your data will eventually get answered. If there are any problems with the way this data is acquired and processed, it’s going to get caught very early. These kinds of automated, data-driven, patient-centric science that is open to the rest of the world is going to revolutionize the way we do biomedical research. Most of the day-to-day humdrum of science is going to be replaced by intelligent, machine-assisted discovery that is robust, reproducible and fast paced. The technology that enables this is already here and will be implemented in large scale over the next 10 to 15 years and will change our lives dramatically.