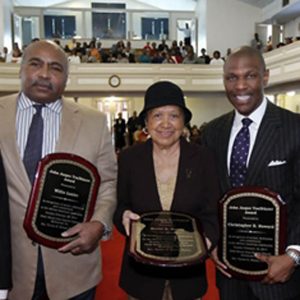 Grace E. Harris, Ph.D. (M.S.W.’60/SW), distinguished professor of public policy, is the recipient of the John Jasper Trailblazer Award. The award honors African-Americans who have led outstanding lives highlighted by sacrifice and selfless service to their community.

Harris, who was once rejected from Richmond Professional Institute due to the state’s segregationist policies, would rise to become the highest-ranking woman and the highest-ranking African-American in Virginia Commonwealth University’s history, serving as provost, vice president for academic affairs and twice as acting president. Today, Harris remains active in the center for public policy institute that bears her name as a frequent contributor and guest lecturer.