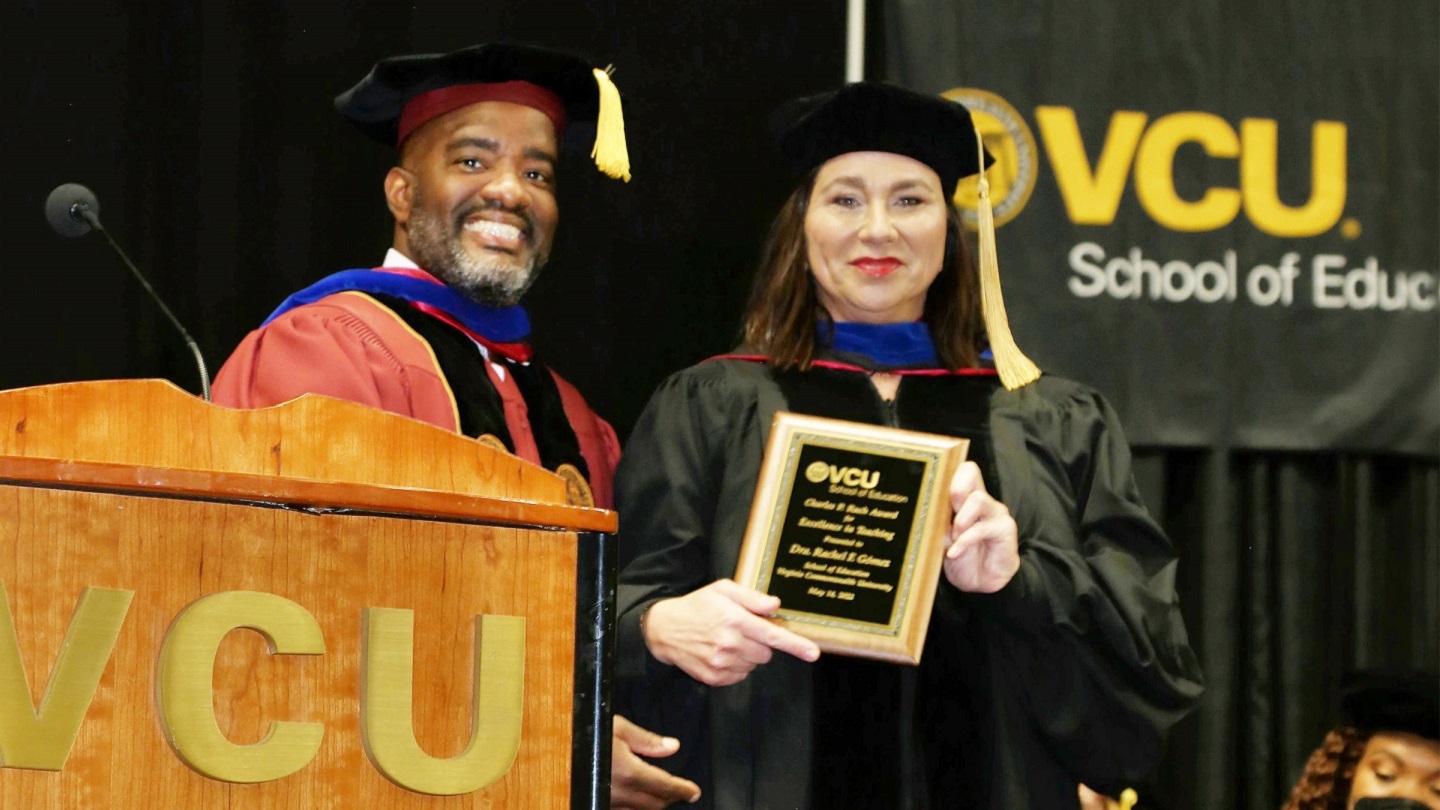 Rachel Gomez, Ph.D., was taking classes in community college when she first learned about colonialism. That eye-opening experience set her on the path she’s still on today.

“So much suddenly made sense to me,” said Gomez, now a tenure-track Assistant Professor in the School of Education (SOE) and a member of the iCubed Urban Education and Family core. With her heritage based in the indigenous and Mexican populations of New Mexico, she realized how colonialism impacted her ancestors.

“I found out how my people were affected by the Mexican American war. I understood why my ancestors worked in the mines for so many years,” Gomez said. “Since then, I have been fascinated by mythological histories, the false narratives we’re given in our kindergarten through 12th grade experiences.”

In her position teaching the Foundations of Education, she can reframe, contextualize, and correct those narratives for her students. And her students clearly appreciate the work she’s doing: this past spring, she was honored with The Charles P. Ruch Award for Excellence in Teaching, an award voted on by School of Education students (pictured above with SOE Dean, Andrew Daire, Ph.D.).

Gomez describes her educational trajectory as non-traditional. As a first-generation college student raised by a single dad, she wasn’t always sure how to navigate the world of higher education.

After taking classes at a community college, she was accepted into the University of Washington but life interfered: she got married, had children and then got divorced. It was 13 years after her first class there that she would ultimately receive her B.A. in International Studies.

Her interests in Mexican American history drew her to the southwest and she enrolled at the University of Arizona. She gained a Master of Science degree with the intention of going on to a doctoral program. But there wasn’t a Ph.D. program in Mexican American studies and politics got in the way of creating one.

“I lived in Tucson where up to 90% of the population was of Mexican descent but there was pushback to extending studies of Hispanic and indigenous cultures,” said Gomez. “I was committed to doing the work I wanted to do so I joined the Mexican American and Chicano/a communities in fighting for the creation of a Ph.D. program.” It took six years.

The breaks in her education may have delayed her academic career but she has no regrets. “I can’t imagine doing it any other way,” said Gomez. “I was waiting for the right time.”

If it took a little longer to get here, Gomez is making up for lost time. “I kind of have a reputation,” she said. “I don’t know if I’m a pot-stirrer but I will question intentions.”

She was invited to VCU as a visiting scholar in the iCubed program in 2019. Since then she has been introducing new ways of teaching and new theories of pedagogy. “I am a student-centered practitioner,” she explained. “My courses are based in dialogue and critical thinking. I’m always bringing in multiple perspectives.”

Gomez is a leading practitioner of Youth Participatory Action Research, or YPAR, that actively involves young people in researching issues in their communities, then using that research to create action plans for sustainable change.

Fantasy Lozada, Ph.D., is an Assistant Professor in the Psychology Department who has worked with Gomez as the former interim lead of the iCubed Urban Education core. She described how Gomez goes beyond working with students to helping educators understand their students’ experiences.

“I really see her as a scholar activist,” she continued. “She uses her research as a basis for her work in the community.” Gomez recently assumed the role of president of the Richmond chapter of League of United Latin American Citizens (LULAC). Just last week, LULAC successfully advocated for the creation of a commission on the status of Latino students in Richmond public schools.

“Rachel answered the call of her community,” said Lozada, who, together with Gomez, presented data highlighting the experiences of Latine students to the RPS school board. “This is a huge win.”

TRANSITION FROM THE SOUTHWEST

When she came to VCU in 2019, Gomez was the first professor hired in the SOE with Latine or indigenous heritage. “Being the only one is hard,” she said. “It was culture shock moving from Arizona. It’s difficult not seeing people who look like you, or speak like you.”

Since Gomez arrived, the SOE has added more Latine faculty members. “We can thank [iCubed director] Aashir Nasim for that,” she asserted. “iCubed has been very intentional about bringing diversity to the faculty. People in the program said we need this and Aashir made it happen.”

Gomez said much more work needs to be done but she feels like she is getting support in making necessary changes. “I have great leadership here and we are aligned on the mission. I’m grateful for that,” she said. “Change is slow but conversations are shifting and dialogue has been created.”