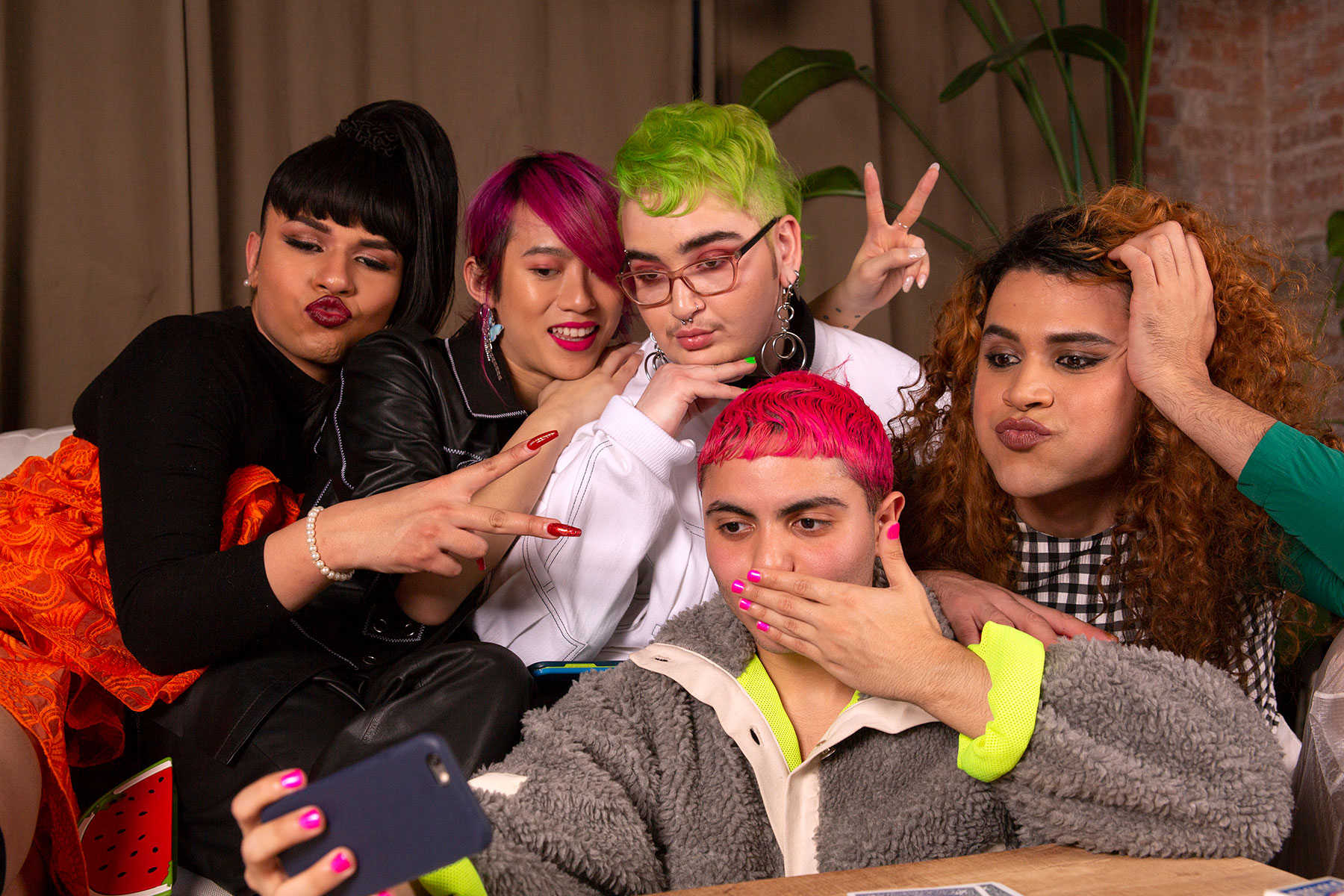 In order to answer the question, “What is a virtual queer space?,” the camp members created Queer Circle at VCU, a digital hub of queer resources that aims to elevate LGBTQ+ goals, achievements and opportunities available within the VCU community and beyond. The website was identified by the camp’s first cohort as a pivotal part of creating a virtual queer space at VCU.

With the hope that a website would be this year’s deliverable, Pathak brought on White as a co-director. White, a scholar in web development and inclusive design, was a guest speaker for Camp Qmunity in 2020.

“I’d guest lectured in a few classes about queer things or the internet, but never both at the same time until I was invited to be a guest lecturer at last year’s Camp Q,” said White. “Archana and I worked from the beginning to blend theory and practice. Our core questions were, how does technology, when not thoughtfully designed, harm minoritized communities? What does it look like to design digital spaces with inclusion, accessibility, and user needs at the forefront? How can we ethically practice the work of digital design? How can we center folks whose identities are put in the margins, rather than leaving them as an afterthought (or not considering them at all, which is how so much design is done)?”

Because Camp Qmunity is open for everyone to apply, there was no way to know what backgrounds the students would have. “A couple of students had experience with web design, branding or coding,” said White. A majority of the group did not have directly relevant experience, however, that did not prevent the students from achieving their goals. In fact, Pathak said that having a group without a computer science or UX design background created a unique opportunity for the students to “take ownership of these spaces that are out there and that are so integral to our lived realities now.” In other words, Queer Circle at VCU would be created by the very same people it serves: queer people, most of whom use websites regularly but have no formal background in website creation.

“What [the students] all brought was a critical perspective, a willingness to learn, and a shared sense of urgency to create something that could be helpful for other students,” said White. “Even through Zoom I could see light bulbs going off as we met throughout the month. The students were fully activated and it was so energizing to work with them. My hope is that some of the students consider careers in web design. So much of technology is about people, not machines.”

Despite taking place in the now-familiar virtual schooling space, this year’s camp members felt that Camp Qmunity was markedly different from online university classes. One difference is that students have to apply and be accepted to attend Camp Qmunity. Senior psychology major Angelica O’Neill said that this provided a sense of trust amongst the students from the beginning. Another key element was the sense of having a unified purpose. Camp Qmunity brought together a group of people to achieve a common objective, compared to a university course where each student has an individual experience and is moving towards their own separate goals.

“I feel like everyone coming into this, being open and being a small group, everyone kind of knew each other by the end of it,” said O’Neill. “And then knowing that we were all there for roughly the same reason, at least trying to do the same thing, made it, I would say, a lot more enriching and a lot more open and therefore more enjoyable for me.”

Sterling Murray, a senior psychology major, said the fact that Camp Qmunity is a paid opportunity further encouraged her to apply. Unpaid internships can exacerbate wealth inequality, with opportunities going to people who have the money and time to work for free. The stipend from Camp Qmunity allows students some financial freedom, opening up time and space in their schedules to learn, collaborate and create. Pathak shared that the idea to offer a stipend came from Aashir Nasim, Ph.D., vice president of the VCU Office of Institutional Equity, Effectiveness and Success.

“When we ask students to do things over summer break, we want it to be equitable, and oftentimes the students that we know would really benefit from these things don’t have space and time and resources to do that. The original idea was that if we’re gonna ask people to participate in something for four weeks over the summer that requires them to remain in the Richmond area, we have to support that. We can’t just assume that everybody can just give up their time over the summer,” Pathak said.

Pathak plans on keeping Camp Qmunity as a group of 10-12 students maximum. This number helps camp members feel more connected to one another. This year’s cohort broke into smaller groups to work on different sections of Queer Circle at VCU, which gave camp members even more time to get to know one another on a personal level.

Both Camp Qmunity cohorts were held completely virtually. Rather than view the virtual space as an obstacle, Pathak saw the benefits of meeting online, especially regarding flexibility.

“I’m pretty clear that [Camp Qmunity] would almost always have that kind of hybridity to it just because it’s so valuable,” Pathak said. “It’s also an accessibility point. We had people who were like, ‘I’m on my lunch break’ and go to their car and join us and then go back to work. So I’m hesitant to just drop it because now it’s okay to be in person.”

VCU’s Q Collective, a creative and intellectual hub in support of LGBTQIA+ artistic and scholarly activities among faculty, staff, students and the Greater Richmond community, will maintain Queer Circle at VCU. Moving forward, camp members Sterling Murray, Brittany Ofori and Angelica O’Neill hope the website becomes more expansive. Murray and junior psychology major Ofori said they would like to see the general Richmond community incorporated on the website, which wasn’t possible this year because of time constraints.

“The site itself is a form of activism,” said O’Neill, “just compiling all of these resources and being like, ‘Here’s stuff that maybe isn’t really advertised.’” However, she hopes Queer Circle at VCU will eventually incorporate more “hopeful and radical” resources, such as curations of queer art and “resources for students to become politically active.”

“The result of each Camp Q should always be a provocation: ‘what should the institution be doing?’” said White. “And the best answer for that will rarely come from institutional actors. It’ll come from the students.”

Camp Qmunity will continue to be offered annually in July. While Pathak has many ideas for future cohorts, she is more than happy to let Camp Qmunity take on a life of its own.

“One of the things I’ve loved about [Camp Qmunity] thus far has been the organic nature of it,” said Pathak. “Inevitably, something comes up over time that’s like, we really need to be thinking about that. And so I’m excited to just let it be that kind of organic thing.”

Camp Qmunity applications will open in the spring. Visit Camp Qmunity’s website or email qcollective@vcu.edu if you have questions.