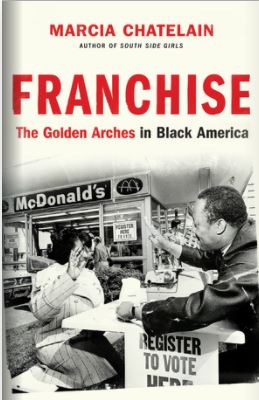 The next Friends of VCU Libraries Book Club selection is “Franchise: The Golden Arches in Black America” by Marcia Chatelain. We will meet on Sunday, January 31st at 2 pm via Zoom. To get the link to attend, please send an email to kjgotschalk@vcu.edu.
About “Franchise: The Golden Arches in Black America” (from publisher W.W.Norton and Company):
An estimated one-third of all American adults eat something from a fast-food restaurant every day. Millions start their mornings with paper-wrapped English muffin breakfast sandwiches, order burritos hastily secured in foil for lunch, and end their evenings with extra value dinners consumed in cars. But while people of all ages and backgrounds enjoy and depend on fast food, it does not mean the same thing to each of us. For African Americans, as acclaimed historian Marcia Chatelain reveals in Franchise, fast food is a source of both despair and power—and a battlefield on which the fight for racial justice has been waged since the 1960s.
On the one hand, we rightly blame fast food for the rising rates of obesity and diabetes among black Americans, and fast food restaurants are viewed as symbols of capitalism’s disastrous effects on our nation’s most vulnerable citizens. Yet at the same time, Chatelain shows, fast food companies, and McDonald’s in particular, have represented a source of economic opportunity and political power. After Martin Luther King, Jr.’s assassination in 1968, many activists turned to entrepreneurship as the means to achieving equality. Civil rights leaders, fast food companies, black capitalists, celebrities, and federal bureaucrats began an unlikely collaboration, in the belief that the franchising of fast food restaurants, by black citizens in their own neighborhoods, could improve the quality of black life.
Equipped with federal loans and utterly committed to the urban centers in which they would open their little sites of hope, black franchise pioneers achieved remarkable success, and by the late 2000s, black-franchised McDonald’s restaurants reported total sales exceeding $2 billion. Fast food represented an opportunity for strivers who had been shut out of many industries, denied promotions in those that would tolerate them, and discouraged, in numerous ways, from starting their own businesses, all because of the color of their skin. But a parallel story emerged, too—of wealth being extracted from black communities, of the ravages of fast food diets, of minimum wage jobs with little prospect for advancement.
Taking us from the first McDonald’s drive-in in San Bernardino in the 1940s to civil rights protests at franchises in the American South in the 1960s and the McDonald’s on Florissant Avenue in Ferguson in the summer 2014, Chatelain charts how the fight for racial justice is intertwined with the fate of black businesses. Deeply researched and brilliantly told, Franchise is an essential story of race and capitalism in America.VCU Libraries faculty Janet Reid, MLS, Business Research Librarian, and Patricia Sobczak, PhD, Business and Public Affairs Collections Librarian, will lead the discussion.
Note: Marcia Chatelain will be the Black History Month Speaker for the VCU Libraries 20th annual event which is set for Thursday February 3rd at 7 pm.