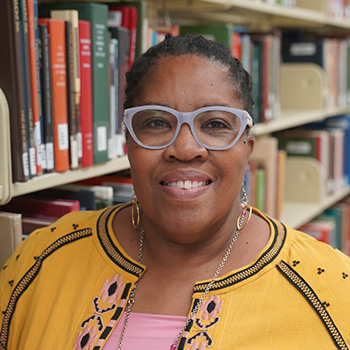 Staff and faculty bring a variety of experiences and backgrounds to the workplace with them. Kathy Parker-Moore is one of the few if not the only female veterans employed at VCU Libraries.

The third week of March is Women Veterans Week in Virginia, presenting an opportunity to ask Parker-Moore a bit about her experiences. She is a Senior Library Specialist 3 who catalogs physical and electronic resources.

What is your military service background? Which branch? Where and when served? What job roles did you have in the service?

Why were you drawn to military service?

I had three brothers who served in the military previously and one younger brother after myself to serve. You could say military service is a family affair.

Since March is Women’s History and Women Veterans Week in Virginia is March 15-21, do you have any thoughts about women serving and how that has evolved over the years? Women face special challenges in any profession but the male, dominated hierarchical military presents women with many barriers of culture and attitude.

My time in the military was awesome and an experience I wouldn’t change.

The military has changed so much for women with more opportunities. When I was at Langley Air Force, I don’t remember ever seeing a woman fighter pilot. At  the time I never gave it a second thought … now women have all the opportunities men have.

So many veterans and even ROTC students say that their training in the service prepared them deeply and broadly for a variety of work assignments. How do you think your training and experience in uniform helps you in your work at the libraries?

The military trained me to have a very disciplined approach to work and to always do my best.

How did you land here at VCU Libraries?

After leaving the military in 1983 with a young child, I was self -employed for a year during small catering  jobs. My husband, whom I met in the military, was from RIchmond. He received a job offer and I decided to head back into the workforce. The state being a large employer was a great opportunity….a friend mentioned the hourly position and I applied. The rest is history.

I started at TML Circulation Desk in June 1984 as an hourly employee for the summer. In August a position came open and in  September I became a full time employee. In 1989 after working at TML for 5 years I decided to venture to Cabell and work in the Catalog Maintenance and Preservation Dept.  In 1996 an opportunity presented itself and I moved into the Cataloging dept. (Currently MAD Dept)

What’s next for you?

After working for VCU Libraries for 36 years I’ve decided to retire in December.

Working for VCU  has been very rewarding.  I appreciate all the opportunities working across the libraries with such a diverse group of people.