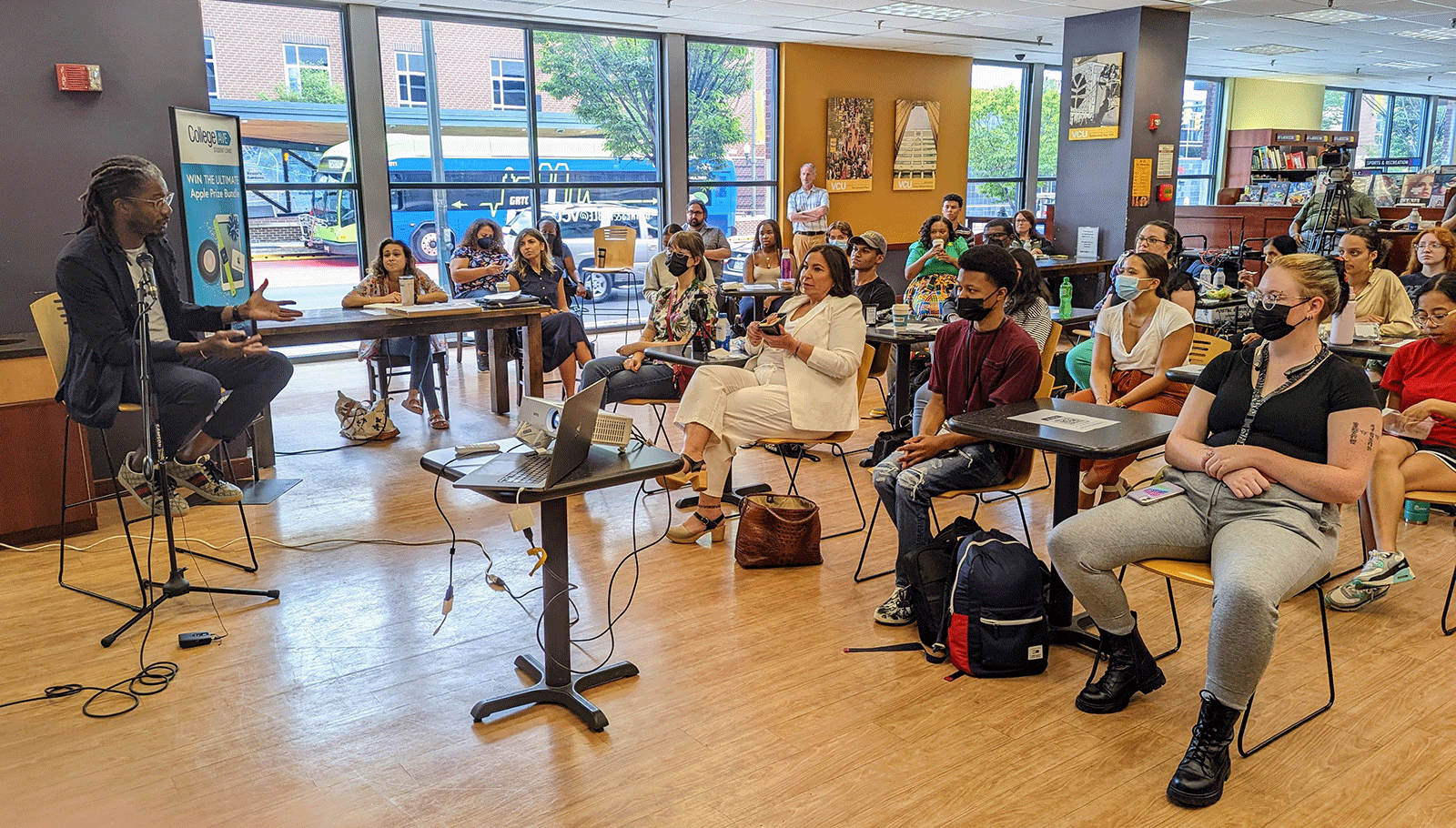 iCubed Scholar Kicks-off My Life, My Scholarship Series Before Standing-Room Only Crowd

Dwayne Ray Cormier, Ph.D, remembers the day that he decided to become a genius.

“I remember when I was in school one of my teachers called me dumb, really aggressively. So, I just thought about an antonym for that. That day, I became a genius. I never tested as a genius but that day I became one,” Cormier said.

Cormier is an assistant professor in the Department of Foundations of Education in the VCU School of Education, and an iCubed Urban Education and Family core scholar.  He shared that among a number of personal and professional anecdotes in a PechaKucha-inspired discussion kicking-off this year’s My Life, My Scholarship Symposium Series.

The monthly lectures feature speakers from the Institute for Inclusion, Inquiry and Innovation (iCubed) and Hubert H. Humphrey Fellowship program examining how their lived experiences have impacted their research and scholarly interests. Cormier is one of seven scholars sharing their stories this academic year.

“I tell people that I am socially biracial.”

Cormier spent most of his childhood in the small town of Ames, TX, which he describes as a “functional racist community.”  Cormier’s father was incarcerated for many of his formative years. Much of their relationship took place through a series of letters, including drawings on the envelopes that held their correspondence. Cormier said his mother always tried to do her best.

“I’m just glad she kept me, to be honest. I mean, understanding what could have been. Sometimes, your mom has just one job: to get you here. That’s how I kind of look at it,” he said. “My research is always very qualitative. I alway watch. My mom is a queer women so I watched that struggle and the subsequent bullying.”

Because of his parents’ challenges, Cormier spent time in and out of foster care, often at a nearby home for boys. That’s where Cormier had his first brush with fame, randomly meeting the late boxing legend Muhammed Ali.

“It was Saturday. We were just walking across the campus. This limo comes up. He talks to us for like two or three minutes, and I’m like, you put a battery in my back. That was cool,” Cormier said.

Cormier says the experience at the boy’s home shaped him in unexpected ways.

“I learned how to play golf, which ultimately got me to college. Malcolm X is probably the first Black man – the Denzel movie – that imprinted on me while living there. I got in trouble. The next day I started this revolutionary thing. I got a slap [on the wrist]. You can’t do that. Whiteness creeped up. I was all good until I did that. They cut me off real quick,” he said. “Between the Malcolm X movie and Good Will Hunting – that’s an interesting binary. But somehow that shaped me. Somehow, this kind of got me together.”

Donna Turchi was among the connections that Cormier made at the boys home. She was a caseworker when they first met. She went on to be the home’s director.

“She is probably my ride or die,” Cormier said. “This is who I imprinted on, my mother.”

“She’s been to all the graduations. She comes to all the weddings,” he said. “Family ain’t always blood.”

Cormier says his relationship with Turchi changed how he thinks in two significant ways. First, he believes that experience and connection can help individuals overcome racism and other negative mindsets.

“I tell people that I am socially biracial, if you will. I mean, I imprinted on a white woman and I’ve stood in that gap like I’ve gotten to experience that privilege indirectly,” he said. “Seeing that and experiencing that gives me hope because I’ve experienced it first hand. Relationships matter. Contact matters.”

Secondly, Cormier says it has helped give him a focus and purpose for his academic work.

“The social workers, the teachers, all them kind of people, I have a very big affinity for those type of people. That’s why I try to incorporate them in my work and thoughts because they was very important to my development,” he said.

Cormier’s pursuit of that work, and the journey it’s taken, has been anything but a straight line, carrying him from New England to the deep south. He tried to attend one university because he was interested in a girl who was a student there. He later sought enrollment in Penn State because of the success the school’s football program had in the 1990s.

“I’m very spiritual. Like, I just throw it in the air and it usually happens,” he said.

He joined the U.S. Navy for a while but found that it wasn’t a good fit for him.

“I really don’t like people that I perceive to be less competent than me telling me what to do. It’s not a good look,” he said.

In New Orleans, he was the driving force behind a First Tee program that earned national media attention but the city’s rough-and-tumble local politics left a bad taste in his mouth.

“I don’t know how to filter. I’m just not interested in playing games. If you’re about changing lives, let’s do it. There shouldn’t be some conditions,” he said.

Today, as Cormier seeks tenure at VCU, his research into educational practices, opportunity gaps, and trying to quantify racial gaps is earning accolades including the Distinguished Paper Award for the Supervision & Instructional Leadership SIG at the American Education Research Association, and publication in journals that Cormier describes as the hardest to crack.

Cormier says he works slowly but the quality of his work drives him.

“I want all the bells and whistles. I have no administrative dreams. I respect administrators but I would like to just be the wonky professor that’s endowed in his lab and y’all just let me cook,” he said.

And for those coming behind him, Cormier says his success comes from being quick, but not in a hurry.

“Don’t be in a rush. Explore as much as you can. Be a lifelong learner. What the boys home taught me was that you can only dream about what you can see. You can’t dream nothing you ain’t never experienced. If you can go abroad, take advantage of all that stuff,” Cormier said.

We invite you to join us at all future My Life, My Scholarship events for the 2022-23 academic year. Our next event is on Wednesday, Oct. 5, 12-1 p.m. at VCU Barnes and Noble. Lunch will be provided.

Our October speaker is Faye Belgrave, Ph.D., an iCubed scholar with the Culture, Race and Health core, associate dean of equity and community partnerships for the VCU College of Humanities and Sciences and professor in the VCU Department of Psychology.