From playing doctor, to being one 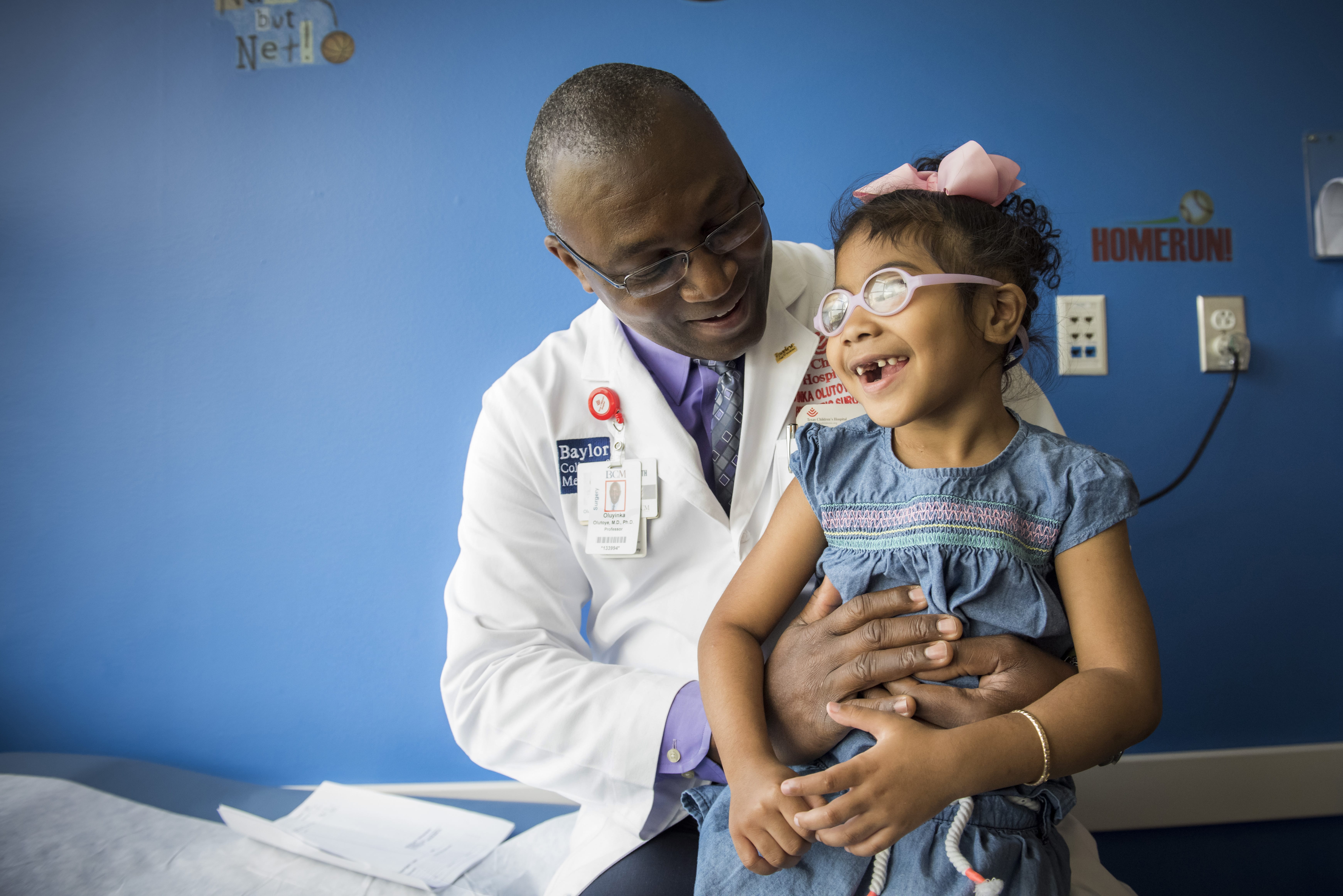 Oluyinka Olutoye, M.D., Ph.D. (Ph.D.’96/M; H.S.’98/M), remembers wanting to be a doctor from an early age. As he recalls, the desire stemmed from an encounter he experienced as a child in his home country of Nigeria.

“I had a sick family member, and a doctor made a house call to see them,” he says. “I remember following him around our home, trying to see as much as I could. After he left, I would play doctor around the house.”

After high school, Olutoye enrolled in a six-year medical program at Obafemi Awolowo University, Ile-Ife, Nigeria, where he graduated in 1988 as valedictorian with a Bachelor of Medicine and Bachelor of Surgery.

“I chose surgery because I liked being able to identify problems in the body and fix them,” Olutoye says. “When I was in school, I also enjoyed embryology, so pediatric surgery was a natural draw.”

Olutoye knew that if he stayed in Nigeria, he would not have access to the latest medical technology, so he moved to the U.S. but found his foreign degree a barrier to working as a surgeon in the States. Refusing to give up on his dream, he accepted a pediatric internship at Howard University Hospital. He remained focused on his goal to become a pediatric surgeon, and he says the team at Howard supported his ambition, even helping him apply for the National Resident Matching Program the following year, which landed him an interview at Virginia Commonwealth University’s School of Medicine.

Andrew Wechsler, M.D., head of the VCU Department of Surgery at the time, offered him a residency, but it was the opportunity to conduct his own research and work on a Ph.D. during his residency that cemented Olutoye’s decision to come to VCU.

“Dr. Wechsler really took a chance on me, especially being a foreign medical graduate,” he says. “I am always eternally grateful for that.”

He made the most of his opportunities. Under the guidance of Arnold Salzberg, M.D., then-chief of the Division of Pediatric Surgery, Olutoye completed his Ph.D. and his general surgery residency and landed a two-year fellowship position in pediatric surgery at the Children’s Hospital of Philadelphia.

“When I counted back, I was the 12th resident that [Dr. Salzberg] had gotten into pediatric surgery,” Olutoye says. “Many, if not all, who studied under him have gone on to become major contributors in the field. It makes me proud to say that I am a product of his legacy and a proud graduate of the VCU surgery program.”

Now, as co-director of Texas Children’s Fetal Center at Texas Children’s Hospital and professor of surgery, pediatrics and obstetrics at Baylor College of Medicine in Houston, Olutoye has achieved his childhood dream and more.

“He’s one of those special people who comes into your life and makes a lasting impact,” says Robert Diegelmann, Ph.D., professor of biochemistry and molecular biology at the VCU Medical Center and one of Olutoye’s thesis advisers. “In the lab, his energy and enthusiasm were contagious, and it has been a pleasure to watch him develop such a stellar career.”

In October, Olutoye co-led a team of 21 doctors

to remove a sacrococcygeal teratoma, a large tumor that grows on the tailbone of a fetus, and then returned the 23-week-old fetus to the mother’s womb.

“What happened in this case was the fetal heart tries to pump blood not only through the child’s body but the tumor as well, which can cause the heart to fail,” Olutoye says. “We monitored the mother throughout pregnancy, and when the growth got too large, we discussed our options and decided surgery would be the best method to save the child.”

For the surgery, the mother and fetus were given general anesthesia, and the part of the fetus’s body where the tumor is attached was taken out of the uterus. Surgeons then removed as much of the mass as possible before returning the fetus to the womb. The team continued to monitor the mother over the course of her pregnancy to ensure that no further problems occurred until she was delivered at 36 weeks.

“It’s an honor and privilege to care for and support these families, especially at such vulnerable moments,” Olutoye says. “I’m looking forward to opportunities that allow me to care for even more children and have an impact. As long as we take it one patient at a time, and help as many as we can, we can help society at large.”